Palestinian Child Dies From Serious Wounds He Suffered In Ramallah 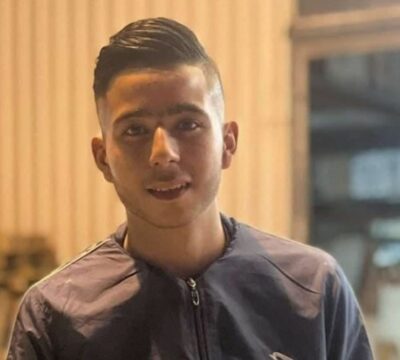 The Palestinian District Coordination Office (DCO) has confirmed that a Palestinian child, who was shot and seriously injured by Israeli army fire near Ramallah Friday, has succumbed to his wounds at an Israeli hospital on Saturday dawn.

The DCO said the Israeli side officially informed that Mohammad Abdullah Saleh Hamed, 16, from Silwad town, east of the central West Bank city of Ramallah, had succumbed to his serious wounds.

Talking to Palestine TV, Silwad Mayor Raed Nimir was shot with a bullet in the face near bypass road #60 and added that his corpse will be transferred to his family in the evening today, Saturday, before the official burial ceremony is held on the same day.

At the time of his injury, Abdullah’s name or age remained unknown; however, his condition was known to the Palestinians to be serious before the army took him away.

Nimir added that the soldiers invaded the town several times within just a few hours after shooting the child, leading to protests. He also said the town is subject to daily invasions and violations by the soldiers.

After his death was confirmed, hundreds of residents marched in Silwad at dawn while chanting against the ongoing illegal Israeli occupation and escalating Israeli violations against the Palestinians.

The Palestinians in Silwad declared a two-day strike in the town to mourn the slain child.

They added that many youngsters protested the invasion before the soldiers fired live rounds, rubber-coated steel bullets, and gas bombs.

Medical sources in Silwad said the soldiers shot a young man with live fire before abducting him and caused several others to suffer the effects of tear gas inhalation.

On Friday night, the soldiers invaded the Jabal ash-Sharaf area in the southern West Bank city of Hebron, attacked a wedding party, and conducted violent searches.