Soldiers Shoot Child With Gas Bomb In The Head Near Ramallah 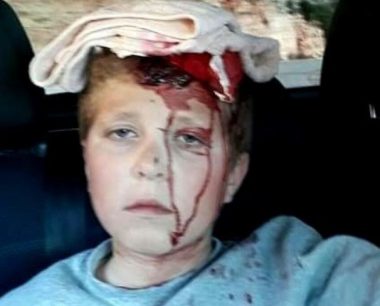 Israeli soldiers shot, on Thursday evening, a Palestinian child with a gas bomb in his head, in Deir Nitham village, near the central West Bank city of Ramallah.

Medical sources said the child, identified as Saleh Mahmoud Tamimi, only 10 years of age, and added that he was shot with a gas bomb in his head.

They added that the soldiers invaded the town and fired dozens of gas bombs at homes at homes in the town, after the army assaulted dozens of protesters.

The child suffered moderate wounds, and was rushed to the Istishari Hospital, in Ramallah.

It is worth mentioning that Deir Nitham is subject to daily Israeli military invasions, violent searches of homes, and constant abductions.

The soldiers are also constantly barricaded at the main entrance of the village, and frequently isolate it.