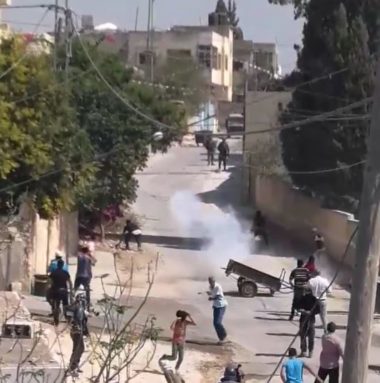 Israeli soldiers attacked, Friday, the weekly procession in Kufur Qaddoum village, east of the northern West Bank city of Qalqilia, shot two Palestinians and caused many to suffer the effects of teargas inhalation.

Morad Eshteiwi, the media coordinator of the Popular Resistance Committee in Kufur Qaddoum, said the soldiers resorted to the excessive use of force immediately after the procession started from the center of Kufur Qaddoum.

Also on Friday, the soldiers attacked the weekly nonviolent procession against the Annexation Wall and Colonies, in Bil’in village, west of the central West Bank city of Ramallah, wounding one Palestinian.