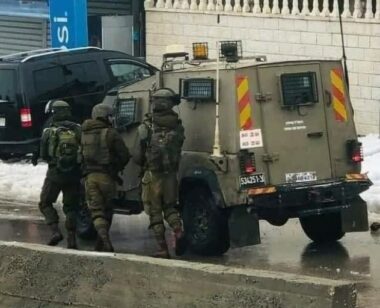 They added that the soldiers fired many live rounds, gas bombs, and concussion grenades at the protesters.

Medical sources said the soldiers shot two young men with live rounds in the lower extremities before local medics rushed them to a hospital in Ramallah.

Also, Israeli soldiers placed Friday dawn, several concrete blocks on the southern and western entrances of Hebron city, in the southern part of the occupied West Bank, and abducted two young men from their homes in addition to confiscating a lathe machine.

On Friday dawn, the soldiers abducted fourteen Palestinians, including a father and his son, and three siblings, from their homes in several parts of the occupied West Bank.

In the Gaza Strip, Israeli soldiers, stationed across the fence, fired several live rounds at Palestinian shepherds east of the al-Maghazi refugee camp in the central area of the coastal region.