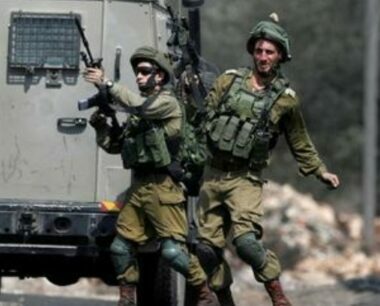 Dozens of Palestinians were injured Friday after Israeli soldiers and illegal Israeli colonizers invaded the village of Qaryout, south of the northern West Bank city of Nablus, leading to protests

Nidal Badawi, the head of Qaryout Village Council, said dozens of colonizers invaded the southwestern area of the village, accompanied by many soldiers.

He added that the locals protested the invasion before the army fired concussion grenades and gas bombs at them.

Palestinian medics moved a young man to a hospital after he suffered an injury to his eye from a fragment of a concussion grenade.

The medics also provided treatment to dozens of residents who suffered the effects of tear gas inhalation.