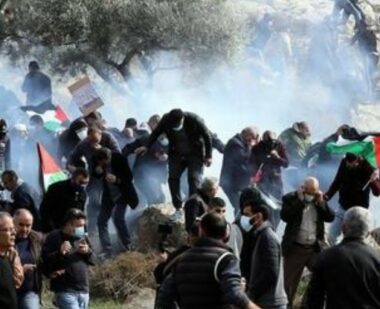 Israeli soldiers injured, Friday, dozens of Palestinians during the weekly procession in Beita and Beit Dajan, south and east of the northern West Bank city of Nablus.

The PRCS added that two of the wounded were shot with rubber-coated steel bullets, and one journalist was shot with a concussion grenade.

The Palestinians marched on their land, holding the weekly procession, and marking Palestinian Land Day before the soldiers started firing gas bombs, concussion grenades, and rubber-coated steel bullets at them.

Ahmad Jibril, the head of the Emergency Department at the Nablus office of the Palestinian Red Crescent Society (PRCS), said the soldiers shot two Palestinians with rubber-coated steel bullets and caused 52 to suffer the effects of tear gas inhalation in Beita.

He added that the soldiers also shot a Palestine TV correspondent with a concussion grenade and caused fifteen to suffer the effects of tear gas inhalation in Beit Dajan.

The Palestinians have been holding ongoing processions on their lands in Sbeih Mountain since May of last year after a group of illegal Israeli colonizers installed an outpost atop the mountain. During these protests, the soldiers injured thousands of Palestinians and killed several others, including children.

The Day of the Land began as an annual commemoration of the massive uprising of Palestinians in occupied Palestine ’48 against Zionist land confiscation in 1976, targeting 20,000 dunums of Palestinian land in Galilee.

The Palestinians of ’48 — Palestinian citizens of the Israeli settler-colonial apartheid regime, survivors of the Nakba who remained on their land even as 80% of their fellow Palestinians were expelled — rose up en masse to confront ongoing land confiscation and settlement. They launched large-scale protests and a general strike, and on 30 March 1976, six Palestinians were shot dead by the occupation forces as they resisted the expropriation of their land. Read More – Samidoun