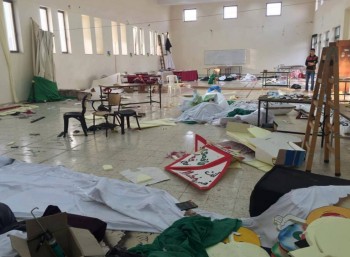 This is a press release from the Deans of Students’ Affairs Council of Palestinian Universities, condemning the Israeli army’s continuous invasions into academics institutions, especially the latest invasion into the Al-Quds University on April 5, 2016.

Deans of students’ Affairs Council of the Palestinian universities strongly condemns the Israeli Occupation Forces raids to Al-Quds University, on April 5, 2016, as part of the ongoing aggression on academic institutions and Palestinians rights to learn, live and exist.
This vicious attack constituted a systematic policy towards the higher education institutions and the violation of c ampus without a legal deterrent or respect for international norms and conventions that provide protection for Academic and Educational institutions in all circumstances, including the conditions of occupation.

The council demands the international community to take all appropriate measures to end Israel’s repeated violations of international law which inhibit basic human rights, including education. The right to Education constitutes one of the most fundamental human rights as it concerns the progressive development of the individual, both as a person and as a responsible citizen. aeli forces stormed in Al-Quds University in the early morning, raiding several buildings including the Deanship of the Students Affairs Building, the Book Fair and the Headquarters of the student council.