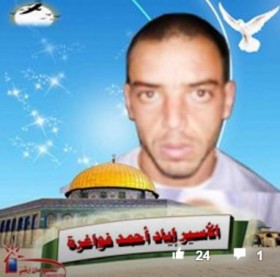 The Palestinian Detainees and Ex-Detainees Committee has reported, Monday, that a Palestinian detainee from Bethlehem, is ongoing with his hunger strike for the thirtieth consecutive day.

The Committee said that Eyad Ahmad Fawaghra, from Bethlehem, is also refusing to take any vitamins, and insists on continuing his strike until Israel revokes its decision to prevent his mother and brothers from visiting with him.

Detainees’ Committee lawyer Yousef Nasasra said the detainee, who is serving a 27-year prison term, suffers sharp migraines, while the Eshil Prison Administration is trying to pressure him into stopping his strike in return for giving him pills to relieve his pain.

Nasasra added that the administration in Eshil confiscated his clothes, bed covers  and is even preventing him from showering, in addition to invading his room to search it twice a day.

He also said that, besides Fawaghra, there are three Palestinian detainees who are holding hunger strikes, in different Israeli prisons.

The three listed below, are striking in protest of their continued arbitrary Administrative Detention, without charges or trial;