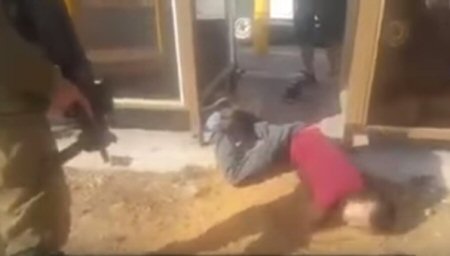 Israeli authorities, on Thursday, released a Palestinian teen from detention after more than a month, originally held in custody over an alleged stabbing attack that happened in September, in the southern occupied West Bank district of Hebron.

Ihab al-Ghaith, a lawyer from the Palestinian Committee of Prisoners’ Affairs said, in a statement, that Israel’s Ofer military court decided to release wounded teen prisoner Haitham Jaradat, 14 — previously reported to be 15 — after he spent 58 days in detention between the Shaare Tzedek Hospital and al-Ramla jail clinic.

Jaradat, a resident of the Hebron-area town of Sair, was shot and injured by Israeli forces after he allegedly ran toward a group of Israeli settlers at a bus stop with a knife.

Al-Ghaith said that Jaradat was shot in his back with a bullet that exited his body through his stomach. The teen underwent surgery at the Shaare Tzedek Hospital after his detention.

Al-Ghaith also pointed out that the teen was constantly handcuffed and cuffed by his feet to his hospital bed, and that a fine of 2,000 shekels ($564) was also imposed on Jaradat upon his release.

Dozens of Palestinians have been arrested, injured, and killed by Israeli forces for alleged stabbing attacks. Those, including minors, who were not killed have routinely been sentenced with serious jail time, according to Ma’an.

In Jaradat’s case, a video was released of the incident showing an Israeli officer asking Jaradat what he was doing in the area, with the teen replying that he came in order to commit suicide.

The video had prompted some to comment that the teen was, in fact, attempting suicide, rather than actually seeking to commit an attack on Israelis.

Since Palestinians are almost always killed by Israeli forces during attacks, there has been rising suspicion that some Palestinian youth, facing extreme hopelessness from years living under a brutal military occupation or experiencing problems at home, decide to carry knives and approach Israeli soldiers with the knowledge that they will be shot to death.

Israeli forces routinely shoot Palestinians, oftentimes killing them, during actual or alleged attacks on Israelis, even if the Palestinian could be detained through nonlethal means. This Israeli practice has prompted rights groups to accuse Israel of carrying out “extrajudicial executions” on Palestinians.