The Battle Ground of the South Hebron Hills 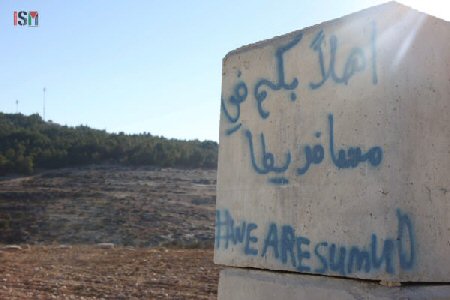 The area of the South Hebron Hills is one of the battle zones against the ethnic cleansing of Palestine. This region stretches along the southern border of the West Bank. The villages of At-Tuwani, At-Tuba, Mufaqarah, and Sarura are located in the South Hebron Hills. These villages lie between a line of Israeli settlements along highway 317 and an Israeli military firing zone to the east. Effectively the local villagers are caught in-between the Israeli army and Zionist settlers.

We met with Fawaz, a local community leader from At-Tuwani, at the Sumud Peace Camp site. Here local villagers have been re-establishing the village with the help of international activists.

“Just living life in this area is ‘big resistance’”, Fawaz told us, “but the villagers decided they had to take further action”.

Sarura is another village in the South Hebron hills. In November 1999 all the villagers of Sarura were evicted and the village was destroyed. Since then Israeli Peace groups have assisted local villagers in the project of rebuilding Sarura. Peace Now, Rabbis for Human Rights and other organisations assisted the villagers to take their case to the Israeli courts. Their success put pressure on the Israeli government.

After this success, meetings in the villages were organised to find effective ways of resisting the occupation without the use of violence and thereby giving the Israeli military an excuse to react with excessive force. Through these meetings the villages in the area organised new initiatives, actions and activities. One of these initiatives was to make stone throwing forbidden. The meetings have been a big success and they are still held today.

These villagers were amongst the first Palestinians that did weekly demonstrations against the wall. The military administration started to cut off the area from the urban centre of Yatta. In response the villagers of the area arranged weekly demonstrations and after 18 months of protest the wall that would have cut off the south was declared illegal.The villagers paid a high price in arrests but they succeeded in preventing the extension of the wall.

In spite of the victory of having the wall along highway 317 declared illegal, a month went by without it being dismantled. Again the villagers demonstrated and blocked off the road and again the court ordered the government to remove the wall. This was a great victory to all the men, women and children that were involved. They had forced the occupation to recognise them as a village with a master plan!

A Battle for Education

In 1998, a school was built in At-Tuwani. As could be expected, a demolition order was issued soon after. The villagers ignored the order and took the fight to court. There was an attempted demolition. To prevent the demolition women stayed in the school during the day and the men at night. More demolition orders came. The school in At-Tuwani is the only one in the area. So now, the children from the surrounding villages now have to come to At-Tuwani to receive their education.

The children who live in the villages surrounding At-Tuwani have often been subjected to settler attacks on their way to school. Due to the violence against the children the route has had to be changed. Ali Awad from the village of Tuba used to be able to walk to school in twenty minutes. At one stage, the journey he had to take to avoid the threat of attack took him two hours. To avoid settler attacks Israeli soldiers have been assigned to walk with the children by a committee for Human Rights in the Knesset. However there have been many incidents where the soldiers have shown up late or left early. The inconsistency of the military presence meant that the escort was not effective in preventing the settler violence. Therefore, organisations working in the area arranged in 2004 to have international activist supervise the military’s escort of the children. 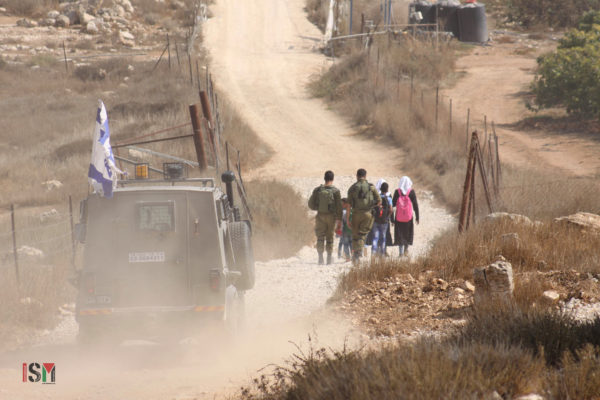 In 1997, armed settlers attacked Sarura and the village was abandoned.

Twenty years later, on May 19th, 2017, a project was launched and the Sumud Peace Camp began to rehabilitate the cave dwellings of Surura to begin to breathe life into the abandoned village again.

Activities and resistance initiatives were brought into action in order to encourage the local farmers to come back. The villagers needed Palestinian encouragement to overcome their fears or they would be afraid to return. The initiatives in Sarura led to the beginning of reconstruction in one section of Sarura. Among the tasks that have so far been accomplished in Sarura are the planting of trees, the building of a community centre, weekly workshops, a gathering place for the people of the village and the enlargement of the caves. 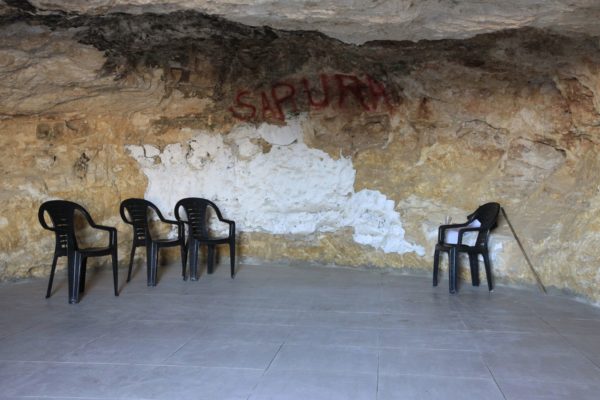 The villagers of Sarura face many problems from the Israeli soldiers and the settlers in the area. ”For two months they beat people, arrested people and destroyed things mainly at night. But we are bringing back life. Now we have a puppy and geese!” Fawaz says.

Among the activities that are planned in the Sumud Peace Camp in the near future is a New Year’s event. This was planned to celebrate the progress in Sarura. The celebration will include a daytime meeting with invited speakers, an evening concert and fireworks!

Fawaz tells us, ”This event is needed – it’s so important – 7 months holding this place in this condition has been difficult. Children have been arrested. The young people have become tired. We need to bring more and more people. This event should breathe new life into the sumud (stedfastness) against the occupation.”

“Non-violence is not an easy choice.
They are pushing you every day.
Just as a human being it is so hard.”
Fawaz

12/10/17 Palestinians Resist Israel and its US Enabler