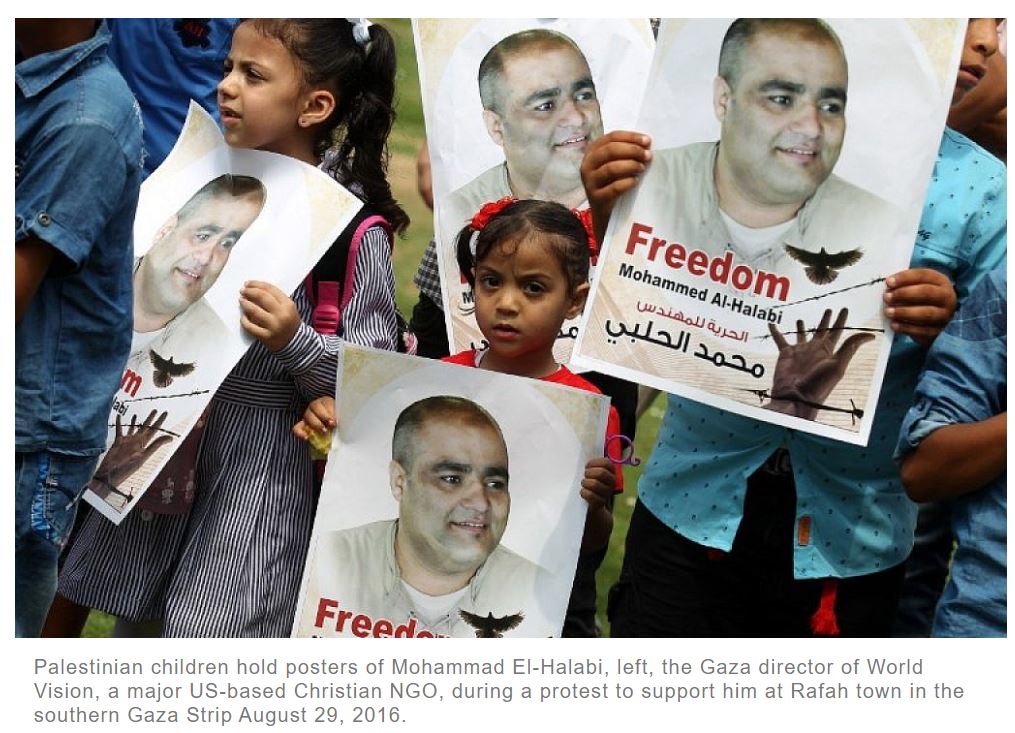 Mohammad El-Halabi’s experience as a Palestinian prisoner in Israel is unique only in its magnitude of injustice – its essence is common to thousands of Palestinians, including numerous practices that contravene international law.

Palestinian human rights worker Mohammad El-Halabi is in court today in Israel, his 154th appearance since his arrest in 2016. His story is both horrific and commonplace, as Palestinian prisoner stories go.

El-Halabi is a refugee, born in Gaza, 42, the father of five, with a Master’s degree in engineering and – until his arrest in 2016 – an employee of the Christian charity World Vision (WV). He devoted 10 years to the organization; for 2 of those years (2014-2016), he led the Gaza branch. In 2014, the United Nations presented him with a Humanitarian Hero award.

El-Halabi, who has helped provide critical medication to children in Gaza who were dying of cancer, now sits behind bars without access to his family and only limited access to his attorney. He holds the distinction of having the longest military trial in the history of the Israeli occupation.

The charges against El-Halabi are preposterous. Israel’s domestic intelligence agency, Shin Bet, alleges that he diverted more than $7 million a year, almost $50 million total, of donations away from charitable work and funneled it to Hamas.

WV’s President, Kevin Jenkins, stated in the days following El-Halabi’s arrest that the organization’s “cumulative operating budget in Gaza for the past ten years was approximately $22.5 million,” which throws the entire accusation into question. Jenkins added that even during El-Halabi’s short time as manager of Gaza operations, El-Halabi was never authorized to spend more than $15,000 without approval.

To its credit, World Vision has stood by El-Halabi, even as the organization conducted an internal audit. The Australian government also examined WV’s books in 2017. Neither probe found any irregularities.

Yet the Israeli government maintains its allegations – Public Security Minister Gilad Erdan accused WV of “turn[ing] a blind eye” to the embezzlement of funds because the organization is “very anti-Israel.” (It is worth noting that NGOs like World Vision have been at work in the Palestinian territories for years because Israel as occupier has neglected to care its occupied population in accordance with international law.)

This is not the first time such accusations have been leveled against individuals and groups trying to bring relief or justice for Palestinians – even Oxfam has been attacked.

“Secret evidence” is another standard tool of Israeli “justice.” Israeli prosecutors claim to have proof of guilt, but withhold the information from both the prisoner and his lawyer. The accused is not present for the proceedings against him or able to argue for his innocence. The judge’s decision is based only on the prosecution’s side of the story, denying the very essence of a fair trial.

Secret evidence is the basis of the case against Mohammad El-Halabi, as it has been for many other Palestinian captives.

As part of his detention and interrogation, El-Halabi has been tortured. His parents and lawyer confirmed that he has been beaten, shocked, and mentally abused. He has lost hearing in one ear due to his mistreatment.

El-Halabi joins a huge group of Palestinian prisoners in this ordeal. Israeli interrogators regularly use beatings and other forms of torture, as well as threats against family members (especially females) to elicit false confessions.

Torture is so common in Israeli prisons, including among Palestinian children, that US Congresswoman Betty McCollum proposed legislation in 2017 and 2019 calling attention to the practice and blocking the use of American aid to subsidize the practice.

The use of torture is one of the reasons for the Israeli military court’s almost 100% conviction rate.

Another reason is its regular use of plea bargaining – which “allows” Palestinians to spend less time in prison for crimes they did not commit.

Not far into El-Halabi’s trial, an Israeli judge recommended that he accept a plea deal because he would almost certainly be found guilty. He chose instead to fight the charges, although he knew the likely outcome.

Astonishingly, as his attorney points out, “Israel knows that Halabi is innocent. Some Israeli officials told me that.”

El-Halabi has been the victim of many other strategies that keep Palestinian prisoners from getting justice.

His attorney tells of witnesses who have been blocked from leaving Gaza to testify for him; Israel’s refusal to give him needed medical treatment, and dragging the trial out for years with no end in sight.

Numerous other irregular practices in Israel’s military court system have been documented for years.

As soon as the charges were released against Mohammad El-Halabi, World Vision shut down its operations in Gaza. As the trial drags on 4 years later, the work remains suspended.

In addition, the Australian and German governments – both generous donors to the organization’s work in Palestine – were among many benefactors to suspend their funding.

As WV reminded its patrons, the organization has helped tens of thousands of Gazan children, providing food and medical care, and “aid from the international community remains a lifeline for 1.1 million people in Gaza, and one in four children in Gaza are in need of psychosocial support” – these people join El-Halabi in suffering injustice at the hands of Israel.

Experts believe the whole point of these wrongful practices is Israel’s desire to intimidate human rights organizations in the Palestinian territories and their donors. The specter of “supporting terrorism” could effectively cut off Gaza from any outside help.

Israel has successfully kept the people of Gaza under a brutal blockade for 14 years, blocking medical supplies, building materials, and other staples from entering the enclave. The population is vulnerable and desperately in need of the kind of humanitarian aid that World Vision used to supply.

Mohammad El-Halabi is just one face of Israel’s campaign to bring Gaza to its knees – or to its demise.

Kathryn Shihadah is a staff writer and editor for If Americans Knew. She also blogs at Palestine Home.