The Great March of Return Seven Months On 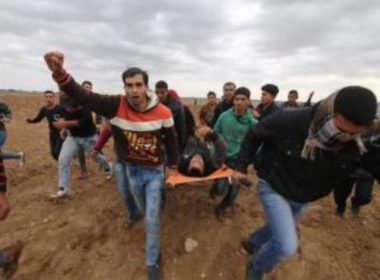 B’Tselem has completed a very revealing survey of 406 live gunshot wound survivors, with information from the United Nations Office for the Coordination of Humanitarian Affairs (OCHA) and the World Health Organization (WHO).

This investigation involved 406 protesters wounded with live ammunition shot from Israeli soldiers across the perimeter fence, dividing Israel and the Gaza Strip.

The Great March of Return protests began in Gaza on March 30, 2018, and have continued every Friday since then.

The survey focused on one specific group injured and only represent 7% of the total gunshot victims.

An analysis of the questionnaires elicited the following information :

58% (237) of this group were more than 10 meters away from the so called security fence which is militantly protected by the Israeli forces, while 41% (167) including 29 minors were shot anywhere from 1-10 meters away.

The protesters reported being involved in the following activities that lead to their being shot by Israeli forces:

These actions DO NOT warrant the use live ammunition, however Israel’s “open-fire” policy allows it, clearly exposed in this survey.

83% (339) of these victims have undergone prolonged and continued medical treatment and 57% (233) have endured physical therapy and rehabilitation. 10% (42) of the surveyed group have become handicapped, a greatly disproportionate punishment.

The report includes an analysis of medical photographs, obtained by Amnesty International, by a forensic pathologist. After reviewing the photographs the expert stated that many of the wounds were consistent with those caused by 5.56 mm military ammunition, and 7.62 mm hunting ammunition which expand inside the body.

Amnesty International said in regards to the injuries that “using high-velocity military weapons designed to cause maximum harm” is “deeply disturbing, not to mention completely illegal.”

The human rights group called Israel’s deliberate shooting of protesters to cause maximum damage a war crime according to International Law.

The effects of these injuries have been devastating for so many Palestinians who should have the right to protest peacefully.

Many of the stories in this report have one outcome, incapacitation. so many have lost their ability to walk, and most have lost the ability to live the life they did before the protests.

One example being Muhammad Abu ‘Aker from Khan Younis, he admits he approached the fence, threw stones, and burned tires to restrict the view of the Israeli sniper scopes.

Muhammad was 30 meters away from the fence when he was shot in the back,
he was in the intensive care unit for a week and in the hospital for four more weeks. He now lives with a colostomy, which he hates, in addition to being in chronic pain, and living on narcotics for relief.