The Jordan Valley Springs: Between the Rock of the Occupation and the Hard Place of Settlers 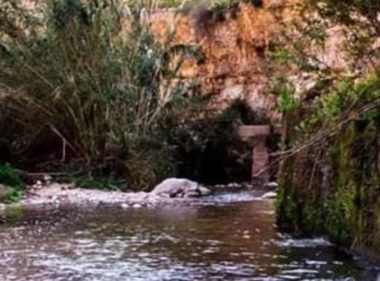 1:13 AM
By Al Harith Al Hasni: THE JORDAN VALLEY, Thursday, October 10, 2019 (WAFA) – Muheeb Fathi Abu Mohsen, a resident of Ein el-Helweh in the northern Jordan Valley, brings his cows twice a day to the water spring of Ein el-Helweh to drink from it ‚Äď once before he goes to the pastures, and in the evening after his return. He does not know whether his cows will be able to drink from that spring anymore after the Israeli settlers have taken control of it and began to do restoration work on it.

There are scores of fresh and saline springs in the northern Jordan Valley. Some of them have dried up due to the policies of the Israeli occupation companies by digging underground water wells. But Ain al-Hilweh spring is a fresh water spring used by residents for domestic use and irrigation.

However, after people have started to rely on water purchased from the villages of Ain al-Baida and Bardala, which are adjacent to them, the spring water is now being used for the livestock.

“If we want to buy water for our cattle, we would need 45 cubic meters a day,” said Abu Mohsen. ‚ÄúThe spring saved us a lot of money.‚ÄĚ

The residents of the northern Jordan Valley face a water problem first because of the occupation policies and second because of the settlers who have dwelled in area outposts for years.

In the fiery summer, residents‚Äô need for spring water increases. It helps them stay in their lands. However, only few herders are able today to bring their cattle to the spring to drink its water.

“Dozens of herders used to bring their cattle to the spring,” said Abu Mohsen, who has lived in the area for more than 50 years. ‚ÄúBut today the settlers also bring their livestock there and they push us out.‚ÄĚ

The consumption rate of the settler living in the northern Jordan Valley is 8 times higher than that of the Palestinian citizen living everywhere else.

According to the Israeli rights center, B’Tselem, the right to water and sanitation is a fundamental right enshrined in international conventions to which Israel is committed, and it therefore must enforce it in all areas under its control. What the Israeli water company, Mekerot, has done in digging water wells has drained dozens of springs in that area.

It was concluded that the Israeli occupation authorities are pursuing this policy towards the water in the Jordan Valley in order to push its Palestinian citizens out of their homes.