The Woman, Who was Killed By Israeli Soldiers Along With Her Brother, Was Pregnant 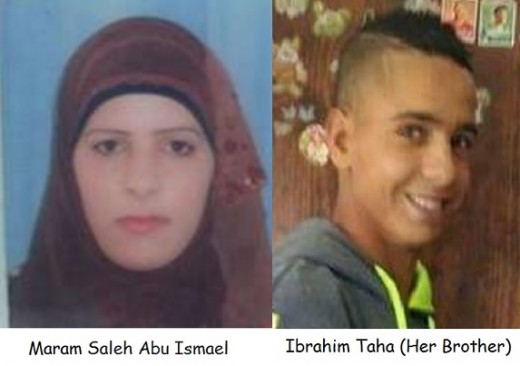 Palestinian medical sources confirmed that the Palestinian woman, who was killed by Israeli army fire, on Wednesday, did not carry an explosive belt as the army claimed, but was instead five months pregnant, and “her only fault was walking the wrong route and not understanding Hebrew.”

The Israeli police and army tried to come up with various allegations, including the usual claim of “carrying a knife,” and then tried to claim that she “was wearing an explosive belt,” while the only thing she “carried” was her fetus.

The slain woman has been identified as Maram Saleh Abu Ismael, 24, a mother of two children; Sarah, 6, and Remas, 4. Her brother, Ibrahim Taha, only sixteen years of age, was also killed as he was walking with her, heading to Jerusalem, after she obtained for the first time, a permit to enter the city.

In contrary to the Israeli allegation that Maram “carried a knife,” and the second allegation of “carrying an explosive,” eyewitnesses said the two victims walked the wrong route while heading to the Qalandia terminal, as they took the route that is only used for vehicles, instead of the pedestrian path.

The soldiers then started shouting in Hebrew, a language neither Maram nor her brother understood, and the woman just froze from fear before the soldiers started firing at her, and when her brother rushed to rescue her, the soldiers shot him too, and both were left to bleed to death.

The two were tens of meters away from the soldiers, and contrary to military allegations, did not attempt to attack any soldier or officer.

Ahmad Taha, an eyewitness from Jerusalem said that after the soldiers shot the pregnant woman and her brother, they retreated a few meters back, and fired several additional live rounds on them, “confirming the kill.”

“There was no stabbing attempt, and no reason for the army to shoot, the soldiers shot them from a distance, and later fired more rounds to confirm the kill,” Ahmad said, “The soldiers then placed two knives next to the lifeless body of the pregnant woman, and shortly after that, the police published pictures showing three knives!”

Mohammad Ahmad, a bus driver who witnessed the shooting, said an Israeli soldier, who standing behind a large concrete block, shot the woman from a distance of more than twenty meters.

“Neither the woman, nor her brother, posed any threat to the lives of the soldiers,” Ahmad stated, “They were far away from the nearest soldier, and did not pose any threat to them – they just walked the wrong route.”

The slain brother and his sister are from Qotna village, northwest of occupied Jerusalem; Maram is Married and living with her husband and children in Beit Surik nearby village.

It is worth mentioning that a Palestinian ambulance rushed to the scene, but the soldiers closed the entire area, and prevented them from approaching the two Palestinians, who eventually bled to death.

More than an hour after the shooting, Israeli military medics placed the corpses of the two Palestinians in black bags, and took them away.

One day before this fatal shooting, a Palestinian man in his sixty nearly faced the same deadly fate when he walked this same wrong route, but when the soldiers started shouting at him he understood them because he speaks and understand Hebrew very well.