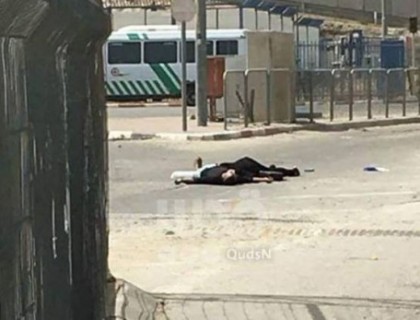 Israeli soldiers shot and killed, on Wednesday, a Palestinian mother of two, who was also five months pregnant, and her brother, at the Qalandia terminal, north of occupied Jerusalem.

The soldiers fired more than fifteen bullets targeting the woman, and prevented Palestinian medics from approaching the two.

The Palestinian Health Ministry said the slain woman has been identified as Maram Saleh Abu Ismael, 24, from Beit Surik town, north of occupied Jerusalem; five-months pregnant and  a mother of two daughters identified as Sarah and Rimas.

Her brother, Ibrahim Taha, 16, was killed killed by the soldiers.

Eyewitnesses said the soldiers fired a barrage of bullets on the two Palestinians, and left them bleeding on the ground, in addition to preventing Palestinian medics from even approaching them, after declaring the area a closed military zone.

They added that the soldiers fired at least twenty rounds on the two Palestinians from a distance, and did not even approach them.

The Israeli Police said members of the Border Guard Units, opened fire on the Palestinian woman as she “walked towards the roadblock holding a knife in her hand.”

The Israeli allegations were refuted by various Palestinian eyewitnesses who said the two did not understand Hebrew, and were trying to reach the roadblock, after the woman obtained a permit to enter Jerusalem, for the first times in Her life.

The soldiers later started firing gas bombs and concussion grenades on dozens of Palestinians in the area, in order to force them away.

The soldiers also fired many gas bombs on dozens of Palestinian journalists, causing many to suffer the effects of tear gas inhalation.

Israeli media sources said the army has been on high alert allegedly after receiving information about an attack that would be carried out by a “Palestinian with an explosive belt.”

According to Israeli daily Haaretz, the two Palestinians “were ordered to stop, but continued to approach soldiers in a drive-through lane, not intended for pedestrians.”

The soldiers were shouting at the pregnant woman and her brother in Hebrew, a language neither of them speaks or understands.

Read the update and eyewitness testimonies: The Woman, Who was Killed By Israeli Soldiers Along With Her Brother, Was Pregnant