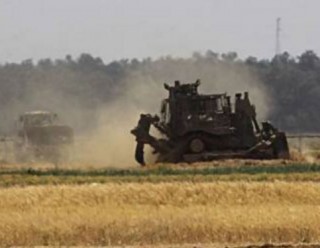 Several Israeli military vehicles carried out, on Wednesday at dawn, a limited invasion into Palestinian agricultural lands east of the al-Boreij refugee camp, in central Gaza, uprooted them and fired smoke bombs.

The Palestinian News & Agency (WAFA) has reported that four Israeli tanks and three armored bulldozers, advanced more than 150 meters into Palestinian agricultural lands, east of the refugee camp, before bulldozing and uprooting them.

The army also placed several dirt mounds in farmlands close to the security fence, in order prevent the Palestinians from approaching it.

The Israeli army carries out frequent invasion into Palestinian lands in various border areas, in the northern and eastern parts of the Gaza Strip, and prevents the villagers from entering them.

On Wednesday at dawn, the soldiers searched homes in the southern West Bank district of Heron and Jerusalem, and kidnapped four Palestinians.

On Tuesday evening, the soldiers kidnapped two Palestinian siblings from their home, in the al-‘Isawiyya town, in the center of occupied Jerusalem.