Threat Of Demolition Looms Over Twenty Palestinian Homes Near Jericho 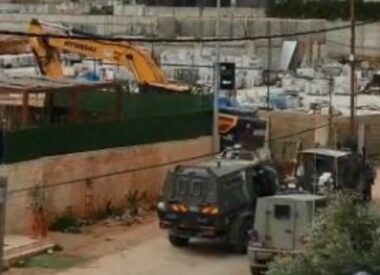 The Israeli army claims the homes were constructed without permits from the so-called “Civil Administration Office,” the administrative branch of the illegal Israeli occupation of Palestine.

However, the homes are all built on privately-owned Palestinian lands that had ownership deeds from the government of Jordan before the year 1967, when Israel occupied the rest of Palestine.

One of the Palestinians, Maan Tannous, 39, told the Palestinian News & Info Agency (WAFA) that he, his wife, and two children, built their two-story home on lands they own in the village.

He added that the property is only 120 square meters and was licensed by the Palestinian Authority in Jericho.

“We live in a residential area that is under the jurisdiction of the City Council in Jericho and receives the services, such as water and electricity, directly from it,” Tannous stated, “We used to be renters; however, we decided to build our home on our land two years ago, and we are still paying the loan installments.”

The village is subject to frequent Israeli violations, including home demolitions and pending destruction orders due to the illegal Israeli colonialist activities.

Essam Smeirat, the secretary of the Fateh movement in Ein Dyouk at-Tihta, said ten homes in the area face Israeli demolitions, which would also lead to the displacement of about sixty Palestinians, primarily children.

Three years ago, Israel demolished fifteen Palestinian homes in the village and continues to try to confiscate its lands to isolate it from Jericho city, in addition to the villages of Dyouk al-Foqa village and An-Nuway’imah. The village is home to approximately 1300 Palestinians, primarily farmers.