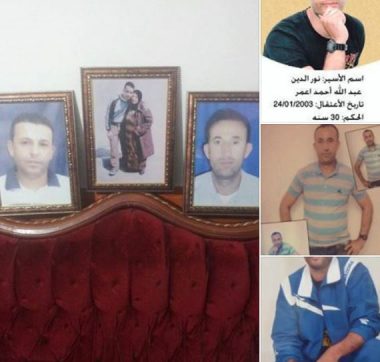 Three detained brothers from Beit Amin village, south of the northern West Bank city of Qalqilia, have been holding hunger strikes for 10 days, demanding removing one of them from solitary confinement, where he has been held for more than three consecutive years.

Two of the detained siblings, Abdul-Salam and Nidal Ahmad Omar, were taken prisoner three years ago, and were sentenced to life-terms and additional twenty years each.

They were convicted of abducting and killing an Israeli soldier, reportedly to hold a prisoner swap agreement to secure the release of their brother Noureddin Omar, who was taken prisoner 14 years ago, and was sentenced to 55 years.

The family called on human rights groups to intervene and monitor the conditions of their sons in Israeli prisons, especially amidst ongoing and escalating violations, and to act on ending them.