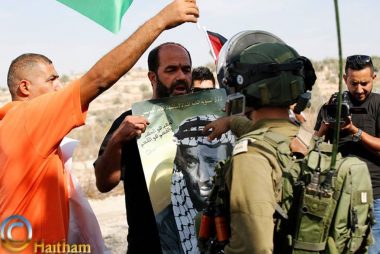 Dozens of residents, Israeli and international activists, held Friday the weekly nonviolent protest against the Israeli Annexation Wall and Colonies, and commemorating the twelfth anniversary of the death of President Yasser Arafat.

The Popular Committee against the Wall and Colonies in Bil’in said the nonviolent protestors marched carrying Palestinian flags and posters of the late president, while chanting for national unity and ongoing struggle until liberation, independence, and the release of all political prisoners.

It added that, as the protesters reached the iron gate of the annexation wall, the soldiers suddenly opened it and started chasing them after declaring the area a “closed military zone.”

The committee stated that the struggle against the illegal Israeli occupation, its wall and colonies, will continue until independence, and the establishment of a sovereign Palestinian state, with Jerusalem as its capital.