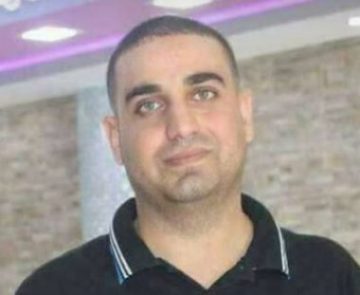 Updated: In the Israeli settlement colony of Har Adar Tuesday morning, a gunman allegedly opened fire on a group of Israeli Border Police, and armed security guards,  killing three and wounding a fourth.

The attacker was then shot and killed by the remaining Israeli border guards at the entrance to the settlement colony.

The Palestinian was later identified as Nimir Mahmoud Jamal, 37, a father of four children, from Beit Surik village, northwest of Jerusalem.

Israeli Ynet News has reported that the three Israelis are members of the “Israeli  Security Forces, a border Policeman and two civilian security guards.”

Two of them, were later identified as Staff Sergeant Solomon Gabrieh, 20, from Be’er Yaakov town, and a security guard identified as Yousef Othman from Abu Ghosh, northwest of Jerusalem.

According to Israeli sources, the gunman arrived with a group of Palestinian workers to the back entrance of the colony early in the morning.

When he was stopped by the Border Police, he pulled out a gun that he had hidden under his shirt and began firing, killing three.

The representative of the armed wing of the Hamas party, the al-Qassam Brigades, issued a statement in support of the attack, saying, “the attack in the Jerusalem area is a new chapter in the Al-Quds Intifada proving that all attempts to Judaize the city will not change the fact that Jerusalem is an Arab and Islamic city.” 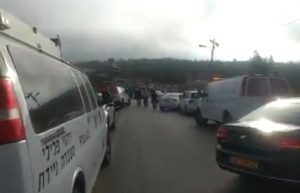 It should be noted that the settlement colony of Har Adar is a Jewish-only colony constructed on land illegally seized from the Palestinian village of Beit Surik, where the alleged attacker was from.

In the news reports of the incident on several Israeli news sites, differing accounts were published in English and in Hebrew.

The killed were identified as ‘Israelis’ in the English version of the story, while in the Hebrew version, the headlines made clear they were armed guards.

Later, some agencies changed the identification of the slain Israelis, defining them as two security officers and a border policeman, or as “three members of the security forces.” 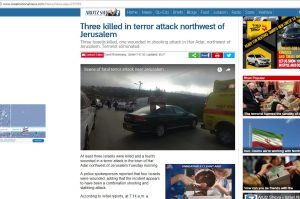 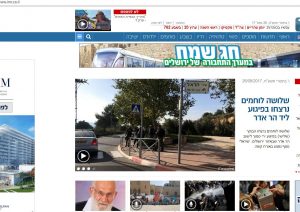