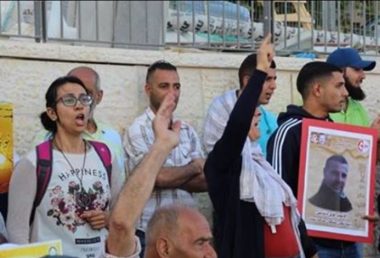 As hundreds of Palestinian political prisoners in Israeli prisons continue their hunger strike for the seventeenth consecutive day, three Jordanian detainees joined the strike, the National Committee for Jordanian Detainees’ Affairs has reported.

The committee added that the detainees in Israeli prisons are fighting a legitimate battle for their basic, internationally guaranteed, rights.

The Jordanian al-Ghad newspaper said the detainees are aware of the life-threatening consequences of the hunger strike, but are determined to continue because they are fighting for basic, fundamental rights.

It called on various local, regional and international human rights groups and organizations to intervene and end the escalating Israeli abuse and violations against the detainees, and to help them achieve these rights.

The Committee added that Israel is responsible for the lives of the detainees, and must be held accountable for its ongoing crimes and violations.

It is worth mentioning that Israel is still holding captive twenty-three Jordanians in its prisons.