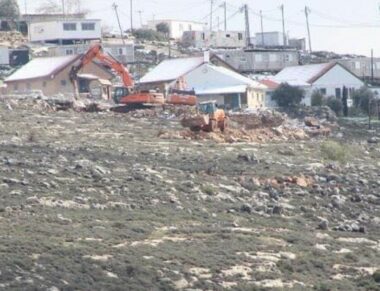 Illegal Israeli colonizers, accompanied by soldiers, bulldozed and uprooted, Thursday, Palestinian lands in Jaloud village, south of the Nablus city, in the northern part of the occupied West Bank.

Daghlas added that the lands, privately owned by the Palestinians in Jaloud, are only 200 meters from their homes in the southern area of the town.

The colonizers are from the illegal Ahiya illegal outpost which was installed on stolen Palestinian lands.

The uprooting of the Palestinian lands was carried out in preparation to expand the illegal colonialist outpost.

During the attack and the bulldozing of the lands, Israeli soldiers surrounded and isolated the entire area to prevent the Palestinians from approaching it.