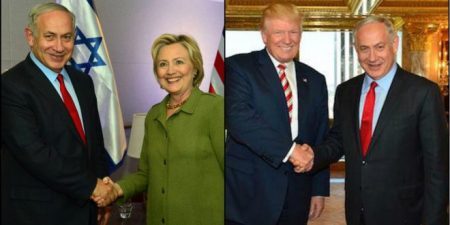 On Sunday, Israeli Prime Minister Benjamin Netanyahu has separately met with the Republican candidate, Donald Trump, as well as the Democratic nominee, Hillary Clinton, in New York.
During the visit, Trump reportedly pledged to recognize Jerusalem as the “undivided capital” of Israel if elected president.

In an official statement, the Trump administration said, according to the PNN:

“Mr. Trump acknowledged that Jerusalem has been the eternal capital of the Jewish People for over 3,000 years, and that the United States, under a Trump administration, will finally accept the long-standing Congressional mandate to recognize Jerusalem as the undivided capital of the State of Israel.”

Apart from the Israeli-Palestinian issue, RT reported that Trump and Netanyahu also discussed “at length” Israel’s “successful”experience in building a border fence, a 708-kilometer long security barrier in the West Bank along the Green Line, which Palestine criticized as an “apartheid wall.”  The Republic nominee is eying to build a similar kind of wall, at the border with Mexico, the construction of which he says would be financed by Mexico.

Following  that, Netanyahu paid a visit to Hillary Clinton, who to her part said she would oppose BDS and UN meddling.
The Israeli PM’s meeting with Clinton, who was also attended by her advisor Jake Sullivan and Israel’s Dermer, lasted about 50 minutes.

“Secretary Clinton stressed that a strong and secure Israel is vital to the United States because we share overarching strategic interests and the common values of democracy, equality, tolerance, and pluralism,” says a campaign statement, released after the meeting by her campaign.