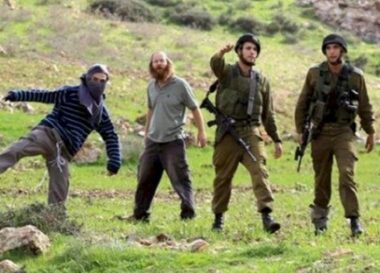 He added that the Palestinians from the town, gathered near the property to repel the attack before the colonizers assaulted them with batons, wounding four.

Daghlas also stated that Israeli soldiers invaded the town, and fired gas bombs and concussion grenades at the Palestinians, causing at least eight to suffer the effects of tear gas inhalation, instead of removing the invading colonizers.

Furthermore, the colonizers invaded farmlands in Burin, and set them ablaze, before the Palestinians rushed to extinguish the fire.