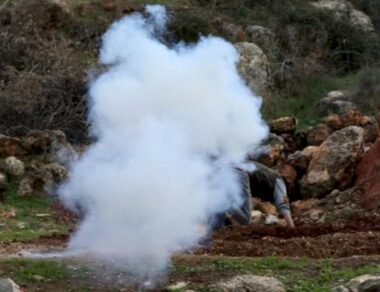 Israeli soldiers injured, Saturday, many Palestinians after the army invaded their orchards while they were picking their olive trees, in Zabbouba village, west of Jenin, in northern West Bank.

Eyewitnesses said the soldiers fired gas bombs at dozens of Palestinians, including volunteers from the Al-Quds Open University while picking the olive trees in Palestinian orchards in Zabbouba.

They added that dozens of residents suffered the effects of tear gas inhalation, before receiving treatment by Palestinian medics.

The orchards are near the illegal Israeli Annexation Wall in Zabbouba and are subject to frequent Israeli violations by the soldiers and the illegal colonizers.

The Palestinians in that areas are also frequently attacked by the soldiers and the colonizers, especially during the olive harvest season.