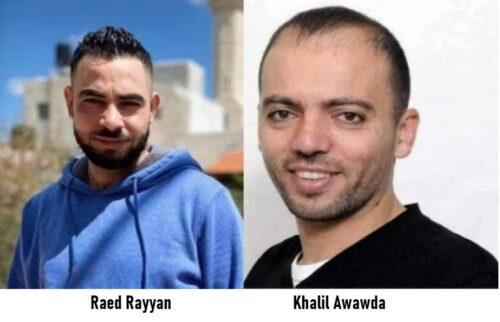 Two Palestinian political prisoners, held by Israeli under the arbitrary Administrative Detention orders without charges or trial, continue with hunger strikes, demanding to be released.

The Committee added that Khalil suffers from migraine, headaches, pain in the joints and abdomen, arrhythmia, and constant fatigue. He also lost at least sixteen kilograms of his weight.

A few days ago, al-Awawda was transferred from solitary confinement in Ofer prison to the infamous Ramla prison clinic.

Al-Awawda, a married father of four children, was abducted on December 27, 2021, and was instantly slapped with an Administrative Detention order.

On November 3, 2021, Rayyan was taken prisoner and was slapped with a six-month Administrative Detention order, followed by an order for four additional months just before his scheduled release, prompting him to start a hunger strike.