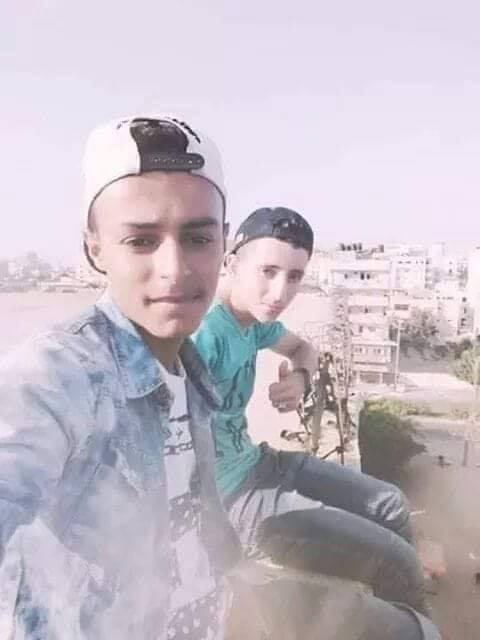 ’Israeli aircraft bomb Hamas headquarters. Hamas fires rockets toward Israel. The Israeli Iron Dome intercepts Hamas rockets. Israel will wage a destructive war. No, it’s a truce! Fatah and Hamas sign a reconciliation agreement. No, the reconciliation efforts were in vain. Abbas will lift his sanctions on Gaza. No, his employees in Gaza still won’t receive their full salaries. The border is open. The border is closed. Electricity will be available six hours a day. No, just four. Israeli naval forces opened fire at Gaza fishermen, arresting three of them and confiscating their boats. They now were allowed to sail out just three nautical miles instead of six…’’

These are the news headlines Palestinians hear every day in Gaza. This was the life of Amir al-Nimra (15) and Luay Kuheil (16).

The weather was steaming hot that day. Families were sweltering in their small, concrete-box apartments. And since there was no electricity, there was no cold water to refresh dry throats and no fans or AC to turn on. My mother used a plastic tray as a fan, waving it back and forth to try to create a breeze. Some people stood scattered in the streets and alleys, hoping for a break in the heat. Others tossed in bed, trying to escape through sleep.

Me and Suleiman (right) with al-Katiba in the background

The beach is no longer a refuge due to the pollution caused by millions of liters of sewage dumping into the sea due to the electricity shortage. (Eighty percent of Gaza’s sea is polluted due to the uncontrolled sewage.)

Drenched in sweat, I sat barefoot on my steps. I couldn’t bear the weather. I had taken four showers in two hours. Now, I wore a singlet [undershirt] and shorts, doing nothing but watching random videos on my phone. I decided to go to a café with my cousins to watch the World Cup match between Belgium and England.

It was 5 p.m. when I joined dozens of fans inside the café. All Gaza cafés were crowded, and there were more than 50 people in this 10 X 10 square-meter café. We watch the players on TV, with the sound of Israeli bombing in the background. Despite the simmering tension caused by the heat and the Israeli attacks, the atmosphere inside the café was boisterous.

‘’It’s Lukaku in the middle of the space … Great pass to Chadli … Low cross to Meunier… Goal! Goal! Goal!’’ Everyone in the café jumped up with excitement, chanting out loud.

Minutes later, we heard the sound of massive explosions. The café owner muted the TV so we could listen to the news on the radio. ‘’Israeli F-16 fighter jets struck the al-Katiba building with four missiles and killed two children,’’ the newscaster intoned. Everyone sat stunned, staring at each other. Then the café emptied in a matter of seconds. Our joy had turned into grief. I hurried to return home, trembling. I no longer felt safe.

A question kept nagging at me: What if I been where Amir and Luay were that day? I had hung around al-Katiba square often, even climbing to the top of the giant building–just like they did. Only six kilometers (about four miles) from my home, it had been under construction in 2012 when it was hit by an Israeli bomb. It’s been abandoned ever since. That is, except for the parkour players who used the shell to practice and perform.

For years, al-Katiba had been one of my favorite places to visit with my friend Suleiman. The square in front of the building is the largest public open space in Gaza City, along with al-Sarraya plaza. From the fifth floor, we could gaze upon the city spread out below us. The square at the bottom is frequented by families, particularly on weekends, who gather with their kids. Vendors sell coffee and slushies. Children play football, fly kites and ride horses.

Best friends Amir and Luay were enjoying their summer holidays. Fun at the beach was no longer possible since it’s polluted. They were “good boys” and didn’t tempt Israeli soldiers by going close to the “security fence.” One of the few choices they had to disrupt their boredom was al-Katiba square. The two friends climbed to the top of the building to take a selfie like I have often done. In fact, I would have been in their place if Suleiman hadn’t traveled to Turkey just a week prior.

I lived what I now consider golden years when I was a kid, prior to the siege. Electricity was on around the clock. Tourists filled our beach and hotels. Life was safe–no airstrikes, no warning “roof taps,” no blood. Fishermen, farmers and laborers all had work. Israelis lived along with us in Gaza, in their settlements. I was allowed to visit Egypt and Jerusalem, praying in the al-Aqsa Mosque compound. I met people from different cultures and backgrounds.

But Amir and Luay never had any of that. They were born in 2003 and 2004, which means they never experienced life before the siege, wars, internal division, unemployment and electricity. They were never able to leave Gaza. Likewise, they only saw their most coveted place, Jerusalem, on TV and YouTube. Instead, they witnessed Trump’s recognition of Jerusalem as Israel’s capital.

They were born and they died in Gaza, where they were buried along with their simple dreams.