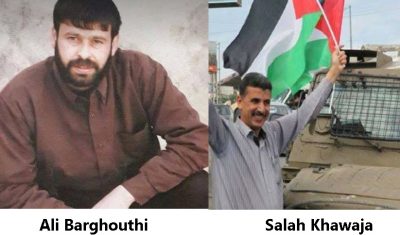 The Palestinian Prisoners’ Society (PPS) has reported that an ailing detainee is ongoing with hunger strike for the third day, demanding receiving treatment for serious health conditions. It also stated that another detainee continues his strike for the eighth consecutive day protesting a new arbitrary Administrative Detention order, issued against him just one day before his scheduled release, despite his bad health condition.

It stated that Barghouthi needs three urgent tests, including Cardiac Stress Test and CT-Scan, but the clinic in Ramla Prison has been delaying these tests.

Detainee Nasr Abu Hmeid, the representative of the detainees in Asqalan, told a lawyer working for the Palestinian Detainees’ Committee, that Barghouthi urgently needs specialized tests, and physicians, as instructed by the doctor in Ramla prison clinic two months ago.

It is worth mentioning that Barghouthi suffers from chest and heart pain, in addition to extreme fatigue whenever he walks or moves.

Barghouthi, 45, from ‘Aboud village west of Ramallah, in central West Bank, was taken prisoner in April 2004, and was sentenced to a life term and additional 40 years.

In related news, detainee Salah Khawaja, 48, from Ni’lin village near Ramallah, is ongoing with his hunger strike for the eighteenth consecutive day.

He went on strike after Israel slapped a new Administrative Detention order against him, for four additional months, without charges or trial, just one day before he was supposed to be released.

Khawaja was abducted on July 23, 2017, and received a four-month arbitrary Administrative Detention order, and was recently slapped with a similar order for three additional months.

He was repeatedly abducted and imprisoned by Israel, and spent, so far, twelve years behind bars, after being sentenced several times, and received administrative detention orders.

He suffers from many health conditions, including high blood pressure, diabetes in addition to weak vision in his left eye, and underwent a cardiac catheterization procedure this past August.