Update 2: “Hamas Arrests Ten Persons Believed To Be Behind The Fatal Bombings In Gaza” 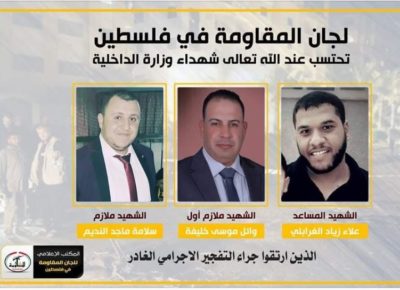 Mousa Abu Marzouq, a member of the political bureau of Hamas, stated on Thursday that the security forces of the Interior Ministry in Gaza have arrested ten persons who are believed to be members of the cell that carried out the two bombings on Tuesday evening, which killed three security officers.

For his part, Eyad al-Bozom, the spokesperson of Gaza’s Interior Ministry, stated on Wednesday evening that the investigations are advancing and that the identity of those behind the bombing have been ascertained.

He added that the bombings were carried out by two suicide bombers who detonated themselves at two police checkpoints and that they have been identified.

Al-Bozom also said that the investigations are ongoing to identify the parties behind the bombings. He added that “those who carried out this cowardly attack are serving Israel’s interests by destabilizing the security conditions in Gaza”.

Al-Bozom also said that the Interior Ministry in Gaza will be revealing all the details of this criminal attack to the public once the investigation is officially concluded.

It is worth mentioning that Ala’ is the brother of ‘Aahed Ziad al-Gahrably, who was killed by the Israeli army during the 2014 Israeli war on the Gaza Strip, while his brother Baha’ al-Gharably, was killed in an Israeli bombing targeting a Palestinian security center in 2008.

In a statement released Wednesday, the Interior and National Security Ministry in the Gaza Strip said that three Palestinian officers were killed in the bombing, which was carried out by two suicide bombers a day earlier in the coastal enclave.

The Ministry identified the officers as:

It said that the three were with the local traffic and rescue police forces, and added that three others were injured.

On his part, the Spokesperson of the Interior Ministry in Gaza, Eyad el-Bozom, said the bombings were carried out by two suicide bombers, south of west of Gaza city, on Tuesday at night,

He said that two suicide bombers attacked two police checkpoints, and added that the security forces are ongoing with their investigations to determine the group/s behind this attack, and is yet to determine the identity of the two bombers.

“Those behind these cowardice attacks are serving Israel’s interests,” he said, “They are trying to destabilize the Gaza Strip.”

El-Bozom also stated that the Interior Ministry will release more details of the bombing once all investigations are concluded.

In related news, the Higher Follow-Up Committee of National and Islamic Factions in Gaza, will be holding a meeting to discuss the bombings and the current situation in the Gaza Strip.

It held Israel and its collaborators responsible for the attacks, and called on the security forces in Gaza to act fast and protect the internal front in the coastal region, especially since Israel is the first beneficiary of internal tension and instability. 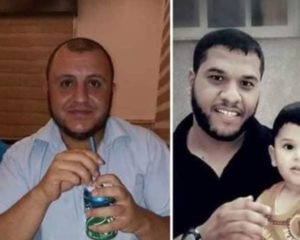 The Palestinian Health Ministry in the Gaza Strip has reported, on Tuesday evening, that two Palestinians were killed, and three were injured, in an explosion that took place west of Gaza city.

The Health Ministry stated that Salama Majed an-Nadim, 32, and Ala Ziad al-Gharabily, 32, were killed in the explosion, and two others, including a woman, were moderately injured.

An-Nadim was a Palestinian police officer, from the Zeitoun neighborhood in Gaza city.

Although the cause of the explosion remains unclear, it came shortly after the Israeli army fired missile into southern Gaza, in what it called retaliation to shells fired from the coastal region.

In addition, an explosion took place near a police roadblock on the Rashid street, south of Tal al-Hawa, west of Gaza city.

The Palestinian Interior Ministry in Gaza said its security forces are investigating the incidents to determine whether they were accidental explosions or due to an Israeli bombing.

Nevertheless, the Israeli army denied any relation with the bombing, and said it was not operating in the Gaza Strip when the explosion took place.