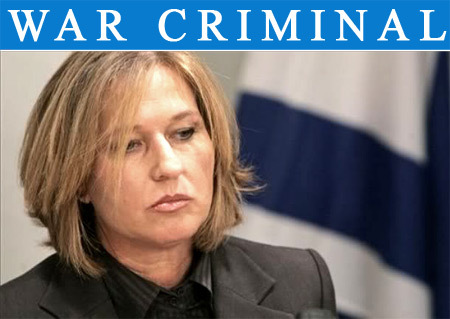 via the BDS National Committee. (Edited for the IMEMC by chris @ imemc.org)

Belgian police have confirmed that they intend to question former Israeli Foreign Minister Tzipi Livni at her arrival in Brussels, today, for suspected war crimes. Livni is listed as a speaker  at a European Parliament event taking place later today. However, it is no longer clear whether Livni will participate in the event, as her name has been removed from the official event website.

Livni’s presence was part of Israel’s PR offensive against the growing Boycott, Divestment and Sanctions (BDS) movement to hold Israel accountable for violations of international law. Israel considers BDS a “strategic threat” to its regime of impunity. In its efforts to criminalise BDS in Europe, Israel hopes to enlist the support of MEPs.

This could be the third time that Livni evades justice for her role in Israel’s 2008/9 assault on Gaza, which saw more than 1,400 Palestinians killed. At the time, she famously boasted, “We will have no pity” as Israel bombed schools, hospitals and homes indiscriminately, as a subsequent UN investigation confirmed.

In 2009, a UK court issued an arrest warrant against Livni, but she narrowly escaped arrest. Embarrassed by the incident, the UK government rushed to change its universal jurisdiction laws to ensure that alleged war criminals from so-called “protected countries” are granted immunity. The move was met with protest from campaign groups including Amnesty International.  Last year, Livni admitted to Israeli media that she had been summoned by UK police again during a second London visit.

The latest Belgian warrant comes as a result of a complaint filed on 23 June, 2010, by a group of Palestinian victims, with the Federal Prosecutor against Israeli officials, including Tzipi Livni, for war crimes and crimes against humanity committed in the Gaza Strip.

The complainants wrote to the Federal Prosecutor last week, communicating Tzipi Livni’s imminent visit and demanding her arrest when she steps off the plane in Belgium, on 23 January.

The Federal Prosecutor’s Office confirmed that Livni will be intercepted by the Federal Judicial Police for questioning following the complaint lodged against her and that it would ensure the necessary follow-up to this case.

Aneta Jerska from European Coordination of Committees and Associations for Palestine (ECCP) said :”The fact that Tzipi Livni may once again escape arrest clearly shows that grassroots Boycott, Divestment and Sanctions (BDS) campaigning is needed today more than ever in order to hold Israel accountable and bring Israeli war criminals to justice. We appeal to the International Criminal Court to take action in this regard.”

MEPs and BDS campaigners are hosting at the same time today a counter-event reasserting the right to BDS at the European Parliament in Brussels, between 16:00 – 19:00, room PHS 5A033. Supporters of Israel’s war of repression against BDS have threatened to disrupt the event.