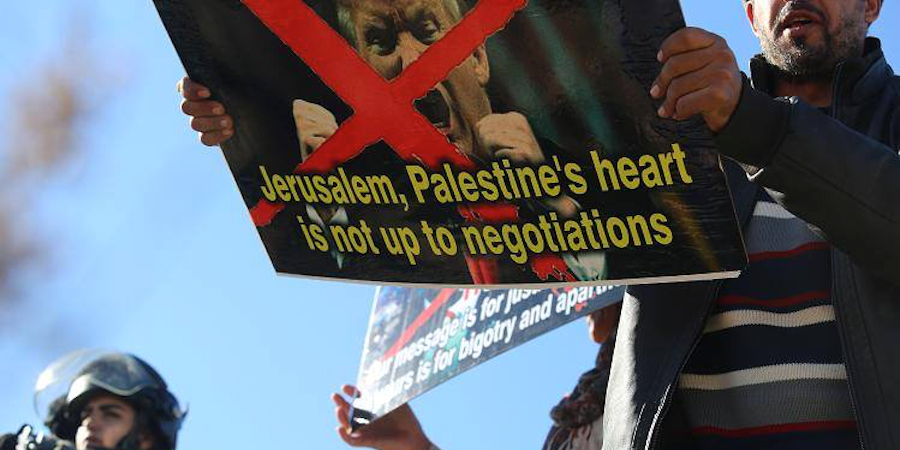 Thousands of Palestinians demonstrate, in the West Bank, against relocating the US Embassy from Tel Aviv to Jerusalem.

Written by Ahmad Jaradat, Senior Project Coordinator at the Alternative Information Center (AIC). Edited for the IMEMC by chris @ imemc.org.

Under the slogan “al-Quds is the key to peace and the key to war,” thousands of Palestinians demonstrated on Thursday, in the West Bank cities of Hebron, Nablus and Ramallah.

The Palestinian national parties organized the demonstrations in response to the pledge, of recently inaugurated US President Donald Trump, to transfer the US Embassy from Tel Aviv to Jerusalem. Establishing al-Quds, also known as Jerusalem, as the capitol of a Palestinian state is a goal shared by all Palestinian political parties.

At the demonstrations, protestors and speakers strongly condemned Trump’s plan as a declaration of war against Palestinian rights and the new Balfour Declaration. Many urged the international community to act swiftly and ensure that the Trump administration cannot move forward with the relocation.

Weekly marches against Israeli occupation in the West Bank over the weekend, such as in Bil’in and Kufr Qaddom, echoed the message of Thursday’s demonstrations.

Speeches at Friday prayers, in most mosques in Palestine, addressed the issue, as well. Khader Habib, a leader in the Islamic Movement party, said on Friday, in such a speech, that the US was “playing with fire.”

The Israeli occupation formalized its annexation of Jerusalem in 1980 by declaring “united Jerusalem” as its capitol, in spite of the United Nations’ rejection of its attempt to change the status of the city. Today, no country has an embassy in Jerusalem, and East Jerusalem is defined by international law as occupied Palestinian territory.

Al-Quds is not a simple issue in the struggle for justice, historically – not only in Palestine, but also in the region. If we look to the recent past, three intifadas happened because of al-Quds: in 1997, the Tunnel Intifada (which occurred after Israel decided to built tunnels under and near al-Aqsa Mosque), the al-Aqsa Intifada in September 2000 (which occurred after former Israeli Prime Minister Ariel Sharon visited al-Aqsa Mosque), and the 2015 al-Quds Intifada (which began after Israeli forces allowed Jewish Israelis to enter al-Aqsa while barring Palestinians from accessing the holy site). Al-Quds truly is the city of symbols.