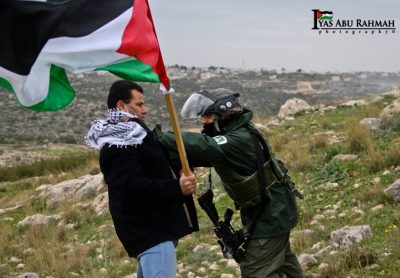 The Popular Committee against the Annexation Wall and Colonies in Bil’in village, in Ramallah, strongly denounced the abduction of Abu Rahma, who has been one of its senior figures.

The Committee added that Abu Rahma was immediately sent to an interrogation center for his nonviolent activities, and ongoing struggle.

It stated that the ongoing abduction of activists, and the excessive use of force against Palestinian, Israeli and international peace activist during the weekly protests against the Annexation Wall and Colonies, and the repeated invasions, will only lead to more resistance and determination.

The Committee called on the Palestinian people to increase their popular protests in every part of occupied Palestine, until ending the illegal Israeli occupation, achieving liberty, and an independent Palestine state, with Jerusalem as it capital.

It is worth mentioning that Abu Rahma was abducted, last Friday, during a nonviolent activity against Israel’s illegal colonies, when the soldiers attacked Palestinian, Israeli and international peace activists attempting to re-establish Bab al-Shams peace village.