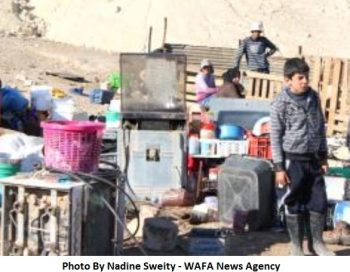 Israeli soldiers demolished, on Monday at noon, several sheds, tents and barns, owned by Palestinians living in the al-Jiftlik town, in the West Bank’s Northern Plains, north of Jericho.

Sabah Abu Rashed, the representative of Jericho District who witnessed the demolitions, along with a representative of the International Red Cross, who came to estimate the damages, said the soldiers demolished many tents inhabited by the Palestinian shepherds, in addition to several barns and sheds used for their livestock.

The soldiers also demolished another barn and a residential shed, used by another Palestinian Bedouin family.

The Public Relations Department of the Jericho Governate denounced the ongoing Israeli violations against the Palestinians, aiming at displacing them and replace them with illegal colonizers.

It added that the violations are part of Israel’s plans to forcibly displace and impoverish the Palestinians, by deprive them from their only sources of income and livelihood.