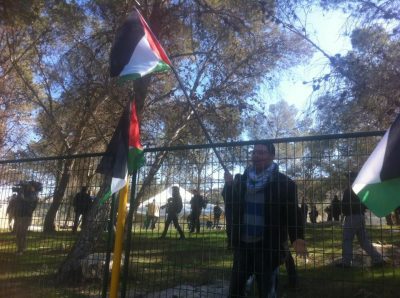 Dozens of Palestinian peace activists, along with Israeli and international supporters, gathered in East Jerusalem Friday to erect tents and try to re-establish the peace village Bab al-Shams that was built in 2013 and destroyed that same year by Israeli forces.

The activists say they chose this day to carry out their action because it is Inauguration Day in the US, and the incoming President has vowed to move the U.S. Embassy to Jerusalem from Tel Aviv, changing decades of US policy recognizing that the status of Jerusalem should be negotiated in future peace talks. This move by the incoming US President would essentially negate all Palestinian claims to the city of Jerusalem.

In establishing Bab al-Shams (Gateway to the Sun) in an area designated by the Israeli government for annexation to the Jewish state, the Palestinian peace activists and their supporters say that they are creating a gateway to peace through justice. They say they are sending a message to the incoming U.S. President that his changes in policy will lead to increased violence and lead away from peace efforts.

They told reporters from the Palestine News Netword (PNN) that they also hope to send a message to the Israeli government, in advance of a vote Sunday on whether to officially annex the Ma’ale Adumim settlement as part of Jerusalem, that their colonial expansion into the West Bank is illegal under international law.

The ‘E1’ plan for East Jerusalem is a plan that was created over 10 years ago by Israeli forces to encircle Palestinian areas of East Jerusalem with settlements, in an effort to annex all of Jerusalem for the state of Israel, in direct contravention of international law.

As the demonstrators set up their tents and flags in the area, and listened to speakers giving talks on the importance of sovereignty and self-determination, Israeli forces moved in and began firing tear gas and concussion grenades at the demonstrators. The troops rushed into the crowd and grabbed six people, who they pulled into their military vehicles and took to unknown destinations, according to local sources.

The re-establishment of Bab al-Shams hearkens back to the original effort, in which a full protest encampment was set up in the E1 area of East Jerusalem.

In an article in the Israeli leftist magazine +972Mag, Irene Nasser, who joined the effort at that time wrote, “The planning, coordination and discipline that went into this action were extraordinary. The exact plans were kept as a closely guarded secret until the last moment, when they were revealed to activists who gathered for a supposed planning camp in Jericho. Those who opted to participate boarded buses and began work on constructing the village. When we arrived at the site, tents were quickly erected, electricity connected, and a media center and clinic set up. On the owners’ behalf, lawyers obtained an injunction from Israel’s High Court barring our immediate evacuation. We held discussions and strategy sessions, as Bab Al-Shams provided the rare opportunity for Palestinian women and men from throughout Palestine to meet face to face. Before long, we were met by others who had run for miles through the hills, bypassing an Israeli cordon to join us.”

Continuing in the reportback from 2013, the Israeli supporter wrote, “Forty-eight hours later, in the middle of the night, after the Israeli Prime Minister’s Office argued before the court that we posed an extreme security threat, hundreds of Israeli Police special forces arrived to evict Bab Al-Shams – proving that acts of unarmed civil resistance are often the most disquieting to those bent on domination and intimidation.

“What made Bab Al-Shams significant was the fact that it asserted that we, as Palestinian activists, would not simply react to injustices the occupation laid at our doorstep, but that we were determined to create our own realities on the ground. With our own hands, we would lay the foundation for a society that is not rooted in strength of arms or coercion, but in partnership, equality and moral determination. Though Bab Al-Shams was evacuated and destroyed within days, it was a milestone in Palestinians’ efforts to take control of their own destiny.”

During Friday’s effort, the Israeli military not only assaulted and abducted six people, they also destroyed the tents and equipment that had been brought to the site for the re-establishment of Bab al-Shams.