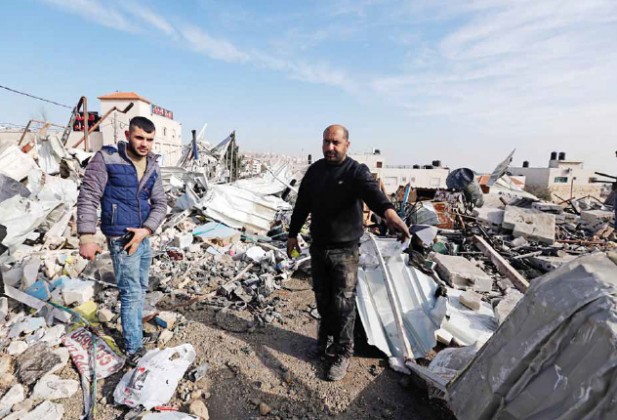 In the West Bank, on 16 January 2017, during clashes between young men and Israeli soldiers at the southern entrance to the village, Israeli forces killed Qosay ‘Amour (17) after directly shooting at him and wounded his brother. Both live in Taqou’a village, southeast of Bethlehem.

During the reporting period, Israeli forces conducted at least 60 military incursions into Palestinian communities in the West Bank. During these incursions, Israeli forces abducted at least 62 Palestinian civilians, including 17 children and a woman. Thirty-two of them, including 13 children and the woman, were abducted in occupied Jerusalem. Among those abducted during this week were PLC Member affiliated with “the Change and Reform bloc”, Ahmed Mubarak (55) and Walid al-Hodali (57), Member of the General Union for Palestinian Writers. The Israeli forces also raided and confiscated contents of Sowan Printing House in Nablus.

On 12 January 2017, The Israeli Municipality forced Ramzi ‘Abdeidat and his brothers to self-demolish 8 facilities used for commercial and agricultural purposes in al-Sal’ah neighbourhood in al-Mukaber Mount village, southeast of occupied Jerusalem. The Israeli Municipality also forced Mohammed Rezeq Sori to self-demolish and removed 4 containers in al-Sal’ah area in al-Mukaber Mount village. Three of the containers were used as stores for construction materials, but the fourth one was used as an office.

On 16 January 2017, the Israeli Municipality demolished a poultry and livestock barn belonging to ‘Ali Zahaykah in Ras al-Mukaber Mount neighbourhood.

On 17 January 2017, Firas Mahmoud self-demolished his 130-square-meter house in al-‘Issawiyah village, northeast of occupied Jerusalem. It should be mentioned that the municipality issued a decision so Mahmoud self-demolishes his house and refused his attempt to obtain a license or postpone the demolition. If he did not do so, the municipality would demolish it and impose on him a demolition fee. Mahmoud started building his houses 8 months ago and intended to move and live in it in the coming days along with his 5-member family.

In the Gaza Strip, on 14 January 2017, Israeli forces wounded Ibrahim al-Sous, (36) from Beit Lahia with a bullet to the right leg. The Israeli forces opened fire at al-Sous while he was collecting wood around 400 meters away from the border fence between Israel and the Gaza Strip. On the same day, fisherman Eyad al-‘Omarein (20) was wounded when Israeli gunboats opened fire at him. On 17 January 2017, fishermen Khaled Abu Riyalah (22) was wounded when the Israeli gunboats opened fire at him as well.

On 18 January 2017, Israeli soldiers opened fire at the lands adjacent to the border fence between the Gaza Strip and Israel, east of Gaza Valley village and east of al-Farahin and ‘Abasan area, east of Khan Younis. However, no casualties were reported.

As part of this week’s Israeli settlers’ attacks against Palestinian civilians and their property, on 15 January 2017, settlers attacked properties belonging to the house of Mohammed Muheisen in Silwan village after failing to raid the house. The Israeli settlers took down and smashed a framed Quran Verse and damaging plantings and plastic chairs.

On 16 January 2017, Israeli bulldozers levelled a section of ‘Azoun village lands, east of Qalqilya, for the interest of establishing a new 3000-meter bypass road. The levelled section was about 172 dunums while around 344 dunums were indirectly damaged. Moreover, 1200 old and fruitful olive trees were uprooted.

In the same context, on 14 January 2017, a group of Israeli settlers were in the place of evacuated “Homesh” settlement, north of Borqah village, northwest of Nablus. They attacked Mohammed Ramadan (38) with stones when he was working in his land. As a result, he was wounded to the left leg and then transferred to Rafidia Governmental Hospital in Nablus for medical treatment.

Israeli troops engaged in excessive force against peaceful demonstrations protesting settlement activities and the construction of the annexation wall this week.

Following the Friday prayer, dozens of Palestinian civilians and Israeli and international human rights defenders organized demonstrations in Bil’in and Ni’lin villages, west of Ramallah, and al-Nabi Saleh village, northwest of the city, and Kafer Qadoum village, northeast of Qalqiliyah, protesting against the annexation wall and settlement activities. Israeli forces forcibly dispersed the protests, firing live and metal bullets, tear gas canisters and sound bombs. They also chased the protesters into olive fields and between houses. As a result, many of the protesters suffered tear gas inhalation while others sustained bruises as Israeli soldiers beat them up.