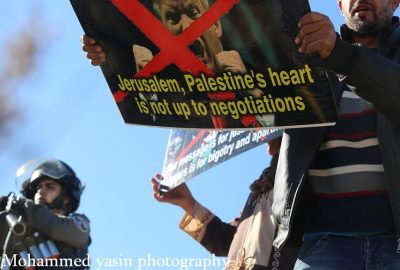 Israeli soldiers attacked, Friday, the weekly nonviolent protest the Annexation Wall and Colonies, in Bil’in village, west of the central West Bank city of Ramallah. This week’s protest, attended by Palestinian, Israeli and international peace activists, was held in condemnation of statement by US president-elect Donald Trump regarding moving the embassy from Tel Aviv to occupied Jerusalem.

The protesters marched from the center of the village, carrying Palestinian flags and posters denouncing Trump and his dangerous statements, and marched chanting for escalating the struggle against moving the US consulate, and chanting for national unity, steadfastness and ongoing resistance until liberation, independence and the release of all political prisoners. 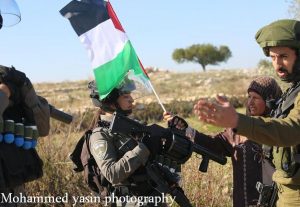 The Popular Committee against the Wall and Colonies in Bil’in said the soldiers assaulted the nonviolent protesters, just as they reached the western area of the village, and started chasing them after declaring Palestinian lands as a “closed military zone.” 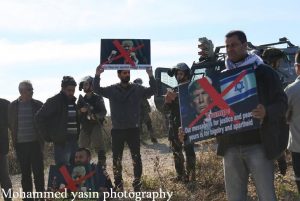 The Committee called on all, Arab and Islamic countries, and all nations around the world to act against Trump, and prevent him from implementing his dangerous and racist plans.

It also called for massive protests across the occupied territories, especially since Israel is moving ahead with plans to build and expand its illegal colonies, in different parts of the occupied West Bank, in direct violation of International Law, the Fourth Geneva Convention and all related treaties.