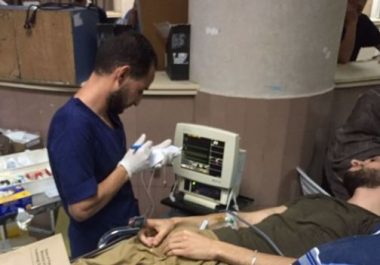 Undercover Israeli soldiers infiltrated, on Thursday evening, into Beit Rima town, northwest of the central West Bank city of Ramallah, and shot seven young men with live fire, after the soldiers attempted to abduct a Palestinian.

The WAFA Palestinian News Agency has reported that the undercover soldiers infiltrated into the town using a fruits and vegetables truck, carrying Palestinian license plates, and attempted to abduct a young man, but he managed to escape.

After their undercover assault was exposed, the soldiers started firing live rounds at many Palestinians who gathered in the area, and shot seven young men with live rounds in their limbs.

Regular army units then invaded the town and secured the released of its undercover officers, who barricaded themselves in a building in the town, leading to more clashes.

Medical sources said the wounded Palestinians have been transferred to Salfit governmental hospital, while one of them suffered various fractures in his injured leg, and will require additional surgeries, likely at a different medical center in the West Bank.

Following the assault, many Palestinian youngsters hurled stones and Molotov cocktails at the military vehicles, while the soldiers fired many live rounds and rubber-coated steel bullets.