UNICEF in Lebanon Ends its Contracts with G4S 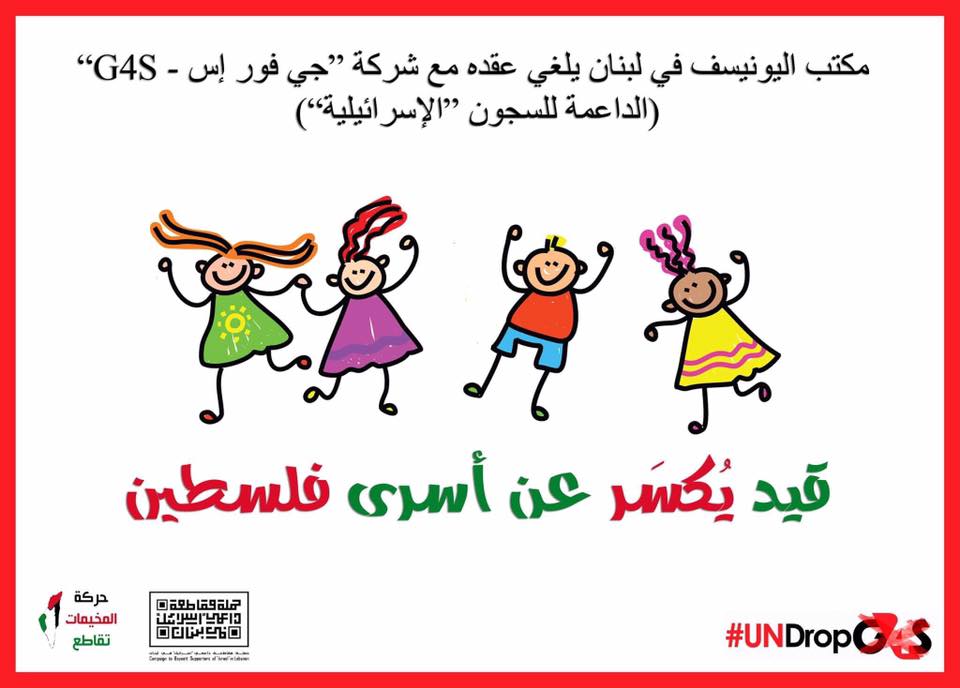 The United Nations ChildrenŌĆÖs Fund (UNICEF) in Lebanon has ended its contract with the worldŌĆÖs largest security company, G4S, following a boycott campaign by activists in the country and across the world over the companyŌĆÖs role in IsraelŌĆÖs violations of Palestinian human rights.

Earlier this month, G4S announced that it is selling $110m worth of its investment in its Israel subsidiary. That would consist selling most of its Israeli business, after an effective campaign against the company waged by the Palestinian-led, global Boycott, Divestment and Sanctions (BDS) movement for Palestinian rights.

Nonetheless, G4S will remain directly complicit in IsraelŌĆÖs violations of human rights through co-running the Israeli Police Academy and its investment in the Shikun & Binui group which builds illegal settlements. G4S will continue to be a BDS target due to its persisting complicity.

The Lebanese Campaign to Boycott the Supporters of Israel and the Palestinian Camps Boycott campaign in Lebanon had organised several actions that called upon UNICEF to end their contracts with G4S over the past year from meetings and social media action to a creative demonstration outside the UNICEF offices in Beirut.

This is an important victory to the #UNDropG4S campaign, which was launched in 2015 by BDS activists globally, urging the UN to end its relationship with occupation profiteer G4S. Since then, four UN agencies in Jordan have heeded this call and, now, the domino effect is starting in Lebanon.

In reaction to the UNICEF decision, Afifa Karake, member of the Lebanese Campaign to Boycott the Supporters of Israel, said:

ŌĆ£This decision is a victory for the Palestinian prisoners who called upon people of conscience to boycott G4S. UN agencies all around the world ought to be consistent with their proclaimed values and principles. Our campaign will continue to target G4S contracts with the private and the public sector in Lebanon until the company completely exits the Israeli market.ŌĆØ

ŌĆ£Despite G4SŌĆÖ sale of most of its illegal Israeli business, BDS activists in Lebanon and across the Arab World are sending a strong message to the company that our boycott campaign will continue until G4S ends its remaining Israeli business. G4S may soon have to choose between investing in the vast Arab market or in IsraelŌĆÖs crimes and human rights violations.ŌĆØ

ŌĆ£The BNC welcomes this victory and salutes boycott activistsŌĆÖ efforts in Lebanon. The increasing pace and strength of BDS campaigns in the Arab World reflect that our struggle against Israeli settler-colonialism unites with the broader Arab struggles for justice, dignity and freedom. The inspiring growth of BDS in the Arab world will significantly amplify the impact of the global boycott and divestment campaigns against multinationals that support IsraelŌĆÖs regime of oppression.ŌĆØ

via the Palestinian BDS National Committee.