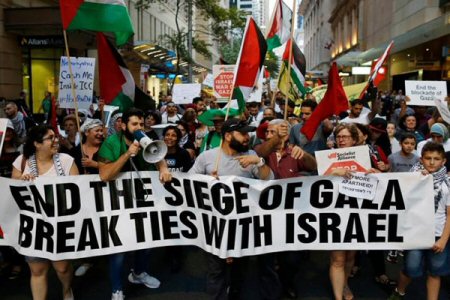 Dozens of academics at the University of Sydney have declared their support for the Palestinian-led Boycott, Divestment and Sanctions (BDS) movement, reported the Australian.

The move comes as a response to the lethal crackdown by Israeli occupation forces on Palestinian protesters in the Gaza Strip.

The Australian notes, according to Days of Palestine, that signatories to the BDS pledge say they “will not attend conferences sponsored by Israeli universities, participate in academic exchange schemes, or otherwise collaborate professionally with Israeli universities until the stated goals have been fulfilled.”

The BDS campaign, describes the paper, is an international movement “inspired by the success of boycotts in bringing an end to apartheid in South Africa.”

Nick Riemer, a senior lecturer in English and linguistics at the University of Sydney and a member of its BDS group, said the response from fellow academics was encouraging and expressed his hope that the pledge would spread to other Australian universities.

“People are already talking at Melbourne about the possibility of something like this,” he said.

According to the Sydney BDS website, some 40 academics have currently endorsed the pledge.