US and Israeli UN Ambassadors Vow to Eliminate BDS 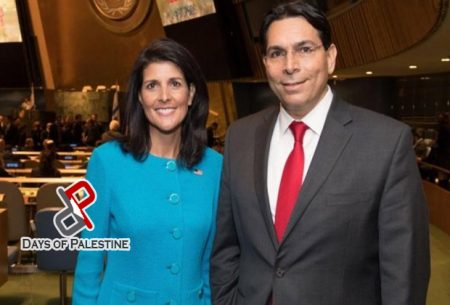 Israeli Ambassador to the UN, Danny Danon, said on Wednesday that Israel would “keep fighting” until it “eliminates BDS completely.”

“There is a new approach [to fight BDS] and it is being heard in the halls of the UN Indeed,” Danon told 2,000 attendees at a pro-Israel UN event, according to Days of Palestine.

“We have seen a lot of legislation since the first conference; 17 states have enacted anti-BDS legislation and we are seeing more groups fighting back against BDS,” he added.

Danon’s remarks echoed stronger remarks about the issue by US Ambassador to the UN, Nikki Haley.

Haley said at the same event: “The effort to delegitimize the state of Israel being waged on college campuses and the anti-Israel obsession at the UN are one in the same. They both seek to deny Israel’s right to exist.”

She continued: “They are both efforts to intimidate US friends and embolden her enemies. They are both extensions of an ancient hatred.”.

The ambassador added: “And how tragic is it that of all countries in the world to condemn for human rights violations, these voices choose to single out Israel.

“We should boycott North Korea. We should sanction Iran. We should divest from Syria. Not Israel. It makes absolutely no sense. And it has no connection to any reasonable definition of justice. You can let the BDS know that the United States has Israel’s back.”