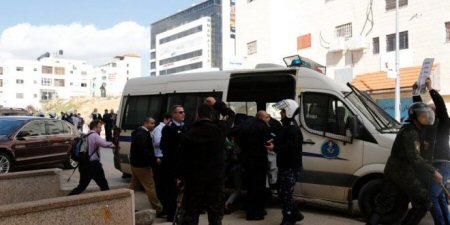 An American delegation, on Thursday afternoon, was evacuated from a research center in Ramallah following a protest took place outside of the center to protest the visit.

The protest was carried out by a group of  activists who raised the Palestinian flag and held banners saying that “the US is part of the problem, not the solution,” in light of US president Donald Trump’s declaration of Jerusalem as the capital of Israel, in December of 2017.

A PNN reporter at the site said that the delegation was evacuated by the Palestinian security forces, while protesters threw eggs and vegetables at them.

Trump’s declaration, which would move the US embassy to Israel from Tel Aviv to Jerusalem, was met with wide protests in Palestine and many other parts of the world.

Following the declaration, the Palestinian Authority said that the US is no longer fit to mediate in the Israeli-Palestinian peace process, while the US threatened to cut off UNRWA funding for Palestinian refugees, and to any country that votes against the Jerusalem resolution at the United Nations.

Banners also carried the hashtag “Hands off Jerusalem,” and called on ending settlements, especially in the heart of Hebron city.