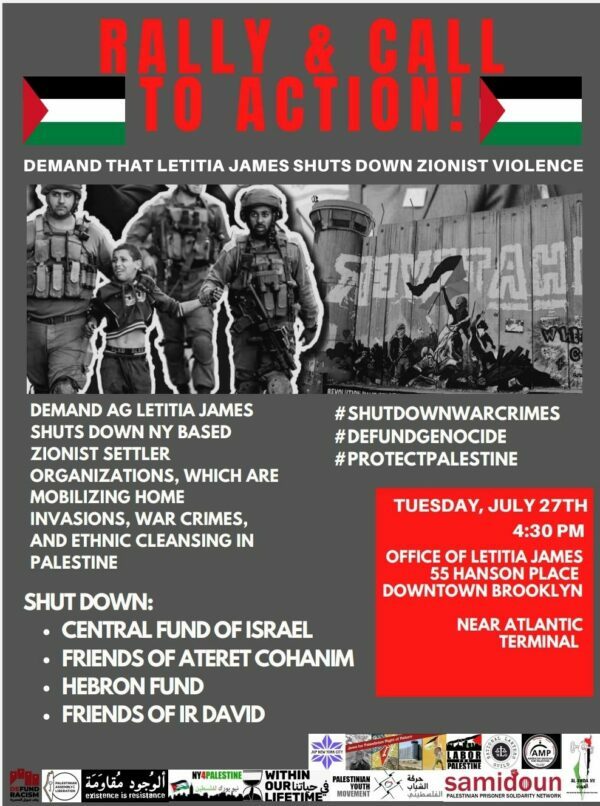 Al-Awda New York (The Palestinian Right to Return Coalition), the National Lawyers Guild, and human rights advocates held a rally, on Tuesday, in Brooklyn, New York at the office of the Attorney General, the Palestinian WAFA News Agency reported.

According to a press release, the groups demanded an end to the aiding and abetting of New York-based groups whose goal it is to further invade and colonize Palestinian-owned lands.

The rights advocates called for an end to the support for the following groups involved in the colonization of Palestine; Central Fund of Israel, Friends of Ateret Cohanim, Hebron Fund, and Friends of IR David.

It is a violation of United States (US) federal law for Americans to engage in war crimes and genocide, it is shocking that there is impunity for such open acts of violence, and it is outrageous that New York State actively shelters, promotes and celebrates such violence, which is itself also a crime.”

These councilmen are celebrating anti-Palestinian violence and sending a message to Palestinians that they are not safe in New York or in Palestine. Our government should work to protect all our communities and not exhorting them to export violence, to break US laws, and legislating anti-Palestinian racism. This has to end, and the Hempstead IHRA Executive Order issued must be struck down.”

This will be the first of many actions to demand the closure and prosecution of Israeli apartheid and war crime perpetrators. New Yorkers want our taxes to be used to support our communities here instead of being used to destroy communities and commit high crimes in Palestine.”