US Reportedly to Continue Aiding UNRWA if School Books Changed 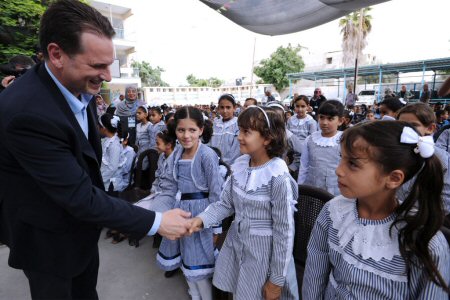 US administration has proposed that the UNRWA changes its school textbooks in order to continue to receive US donations, Jordanian newspaper Al-Ghad reported, on Tuesday.

The newspaper said that the US proposed two amendments to the textbooks, which include the abolition of all references to the right of return and issue of refugees in general, as well having no mention of Jerusalem as the capital of Palestine.

Al-Ghad said that the other proposed condition, which would guarantee the continuation of US aid to the UN body only in occupied Palestinian territories and Jordan, is to stop commemorating occasions such as Nakba Day and the Balfour Declaration.

Meanwhile, the UNRWA’s Chief of Communications, Sami Msha’sha’, said that the US had conditioned the continuation of aid to the organization after carrying out the “amendments”, and said it would only fund UNRWA’s operations in Jordan and the occupied territories.

He reiterated that the UNRWA is suffering from an “unprecedented” budget crisis, but stressed that it would continue offering its services to Palestinian refugees in besieged Gaza, the occupied West Bank, Jordan, Lebanon and Syria.