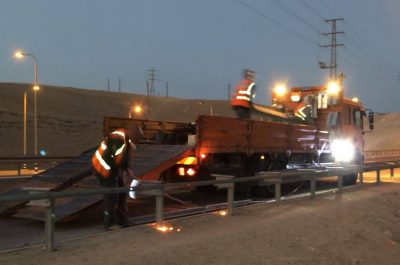 Dozens of Israeli police officers and soldiers have surrounded, early on Wednesday morning, the al-Khan Al-Ahmar Bedouin Palestinian community, east of occupied Jerusalem, in preparation to demolish it, including its school.

Several Israeli vehicles, including bulldozers, invaded the area at dawn, and started removing barriers, and creating a path to reach the Palestinian community, to let the bulldozers and vehicles through in preparation for demolishing it.

Dozens of peace activist, especially from Combatants For peace” Israeli-Palestinian NGO, are with the families in al-Khan al-Ahmar, trying to protect them and stop the demolition of their community, which will result in their displacement.

The Israeli army recently declared al-Khan Al-Ahmar a close military zone, starting on Friday June 6th, which raised fears among the families that the looming demolition orders are about to be carried out.

Residents of al-Khan al-Ahmar, along with Israeli, Palestinian and international peace activists, issued an urgent call, including a Video message, asking for supporting them, and for help in preventing the Israeli army from destroying and displacing this community.

The community is situated between occupied Jerusalem and Ramallah, in central West Bank, and is surrounded by several Israeli colonies, illegally built in direct violation of International Law, and the Fourth Geneva Convention.

Activist Mohammad Owedah, the General Palestinian Coordinator of Combatants for Peace, said the activists will continue to act against Israel’s illegal policies, through ongoing nonviolent resistance.

He added the Combatants for Peace will not abandon the Bedouin families, and their children, in al-Khan al-Ahmar, especially since this community is surrounded by several illegal Israeli colonies.

The families are now about to be displaced, once again, as they are families of refugees who once had homes and lands, prior to the establishment of Israel in the historic land of Palestine 70 years ago.

There are 181 Palestinians living in al-Khan al-Ahmar community, more than half of them are children.

The families are from the Negev, but were displaced by Israel in 1953, and started living in the plains areas near Jerusalem.

Their dwellings lack basic infra-structure, such as water, electricity, roads and any form of services.