VIDEO – Gaza: The Undrinkable Water of a Land Under Siege 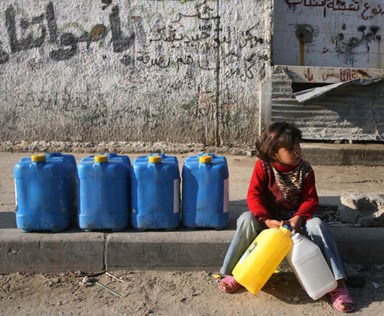 Experts say Israeli policies and wars are to blame for a deepening water crisis in Gaza that will have detrimental effects on public health, especially on the most vulnerable segment of society: children.

The valleys of the Gaza Strip are dry in general. Huge dams were built on its upstreams with a calculated capacity to block as much rainfall as possible, which would fall on all of Palestine and flow into the Gaza Strip. The Israeli occupation built the dams and rebuilt reservoirs next to them, filling up the reservoirs with the water it blocks.”

“The segment of society most affected by polluted water are children and the elderly. Polluted water can cause serious health problems, especially diarrhea, typhoid or paratyphoid, which is caused by salmonella microbes. All these diseases can develop in children when they drink polluted water.”

“To improve the water situation in the Gaza Strip, step-by-step solutions must be found, such as small desalination plants, rainwater collection, wastewater treatment, seawater desalination and infrastructure like reservoirs and pipelines. Pollution form sewage has environmental, health and social effects. It also causes further degradation of the groundwater.

The most significant challenges that led to our water disasters have been the three Israeli wars on the Gaza Strip. The wars continuously destroyed all the reservoirs, wells and pipelines. Israel is not subject to any reliable system. Some projects have been delayed for four or five years. There was talk of bringing heavy equipment for the water authorities, such as drills, in order to maintain the pipeline, wells and networks. This equipment was bought in 2015, so it’s been five years and this equipment is still at a storage unit in the West Bank.”

“The percentage of people who can’t afford to buy water is between 80% to 90%. The situation is difficult. Sometimes, I know a customer does not have drinkable water, and I ask him if he wants to buy it, but he replies ‘no,’ because he doesn’t have money.”

“I fill my gallon containers with water from this street tap because I cannot afford to buy water at all. Water is essential for my home, but I cannot buy it. I walk long distances to get drinkable water. This is, of course, a burden on me and my children. Usually the tap water is cut off for half of the day. And when tap water is available, it is not good for drinking.”

“Tap water causes diseases like kidney stones. Every month, when I have enough money, like 5 shekels ($1.50), I buy water. Sometimes I have to borrow money.”

“Private desalination plants remove salt and harmful chemicals from polluted water. Then the water is sterilised and sold to citizens for drinking. But this is a temporary solution, not a strategic one until we get our water rights from the Israeli occupation.”

“When water is drawn from wells or taken from desalination stations, it is exposed to different types of bacteria, viruses and parasites, especially during the distribution process.”