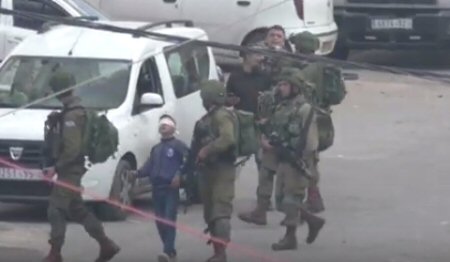 A video footage recently released by Israeli human rights group, B’Tselem, showed Israeli soldiers detaining a 13-year-old Palestinian boy in the southern West Bank city of Hebron, and, while blindfolded, walking him through the streets.

On November 3 at about 11:30 am local time, soldiers detained Abed al-Razeq Idris, 13, put him and a jeep, blindfolded him and drove him around. They then took him to another neighborhood about one kilometer from his home where they took him out of the jeep and walked him, blindfolded, through the streets.

When his father arrived, B’Tselem said, the soldiers refused to turn the boy over. Instead, they drove him to a military post and then to the police station in the nearby settlement of Kiryat Arba. Abed al-Razeq was asked about stone-throwers and sent home alone at about 2:00 pm.

“This case is no aberration,” says the group, according to WAFA. “It is part of the routine violence imposed on Palestinians in Hebron by Israeli security forces and settlers, including physical attacks, threats, verbal abuse, soldiers’ incursions into homes (usually at night) – and the false arrest of minors and adults.”

It added, “Israel cites security to justify this conduct and the segregation it imposes on the city. Yet as this case proves, these claims are baseless and serve merely to bolster a policy of driving Palestinians to leave Hebron by making daily life unbearable.”