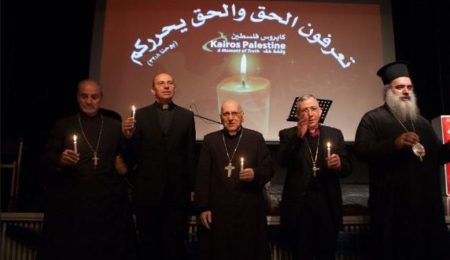 Kairos Palestine expresses deep disappointment that U.S. Secretary of State Mike Pompeo has announced—in a statement that disregards the Geneva Conventions, international law and widespread global consensus—a radical departure from U.S. policy regarding the illegal colonial activities of the State of Israel.

In asserting that the United States will no longer deem West Bank settlements, including those in East Jerusalem, to be “inconsistent with international law,” Secretary of State Pompeo contravenes a 1978 legal opinion by the State Department—upheld with bipartisan support of former administrations—which determined that “while Israel may undertake, in the occupied territories, actions necessary to meet its military needs and to provide for orderly government during the occupation, for reasons indicated above the establishment of the civilian settlements in those territories is inconsistent with international law.”

Secretary Pompeo went on to announce that this move by the United States should not be viewed as the U.S. “prejudging the ultimate status of the West Bank.” Recent actions by the Trump administration belie this statement.

These actions include moving the U.S. embassy to Jerusalem, defunding the UNRWA, shuttering the Palestinians’ office in Washington, D.C., attempts to redefine who may be considered a Palestinian refugee, and embracing Israeli Prime Minister Netanyahu’s annexation plans.

All these moves, including what to date has been revealed of the Middle East peace plan put forward by Trump’s son-in-law and advisor Jared Kushner, have to be interpreted as U.S. attempts to force the capitulation of Palestinians to the will of the State of Israel.

Kairos further stated, according to the PNN:

In our holy text, the story is told of King Ahab coveting the vineyard of Naboth the Jezreelite (1 Kings 21). When Naboth refuses the king’s offer to purchase the land which Naboth describes as his “ancestral inheritance”, a plot is launched in the king’s household to take the land by force. A false charge is made against Naboth, which leads to his being stoned to death, after which King Ahab sets out to take possession of Naboth’s vineyard.

In the same way that the Lord instructed the Prophet Elijah to intervene and confront the king, Kairos Palestine asks its partners—people of faith and those of good will—to call on leaders of the U.S. government to reexamine its failed role as a facilitator of peace between Israel and Palestinians.

Secretary of State Pompeo and the government of the United States must understand that God’s community of justice, peace and provision for all—coming on earth as it is in heaven—may be delayed but will not be denied. As stated in the document, Kairos Palestine: A Moment of Truth, “In the absence of all hope, we cry out our cry of hope.

We believe in God, good and just. We believe that God’s goodness will finally triumph over the evil and hate and of death that still persist in our land. We will see here ‘a new land’ and ‘a new human being’, capable of rising up in the spirit to love each one of his or her brothers and sisters.

Human Interest 11/16/19 “I Did Not Find Our House, There Was Only a Huge Hole.” Sawarkah Children Speak About a Massacre They Survived