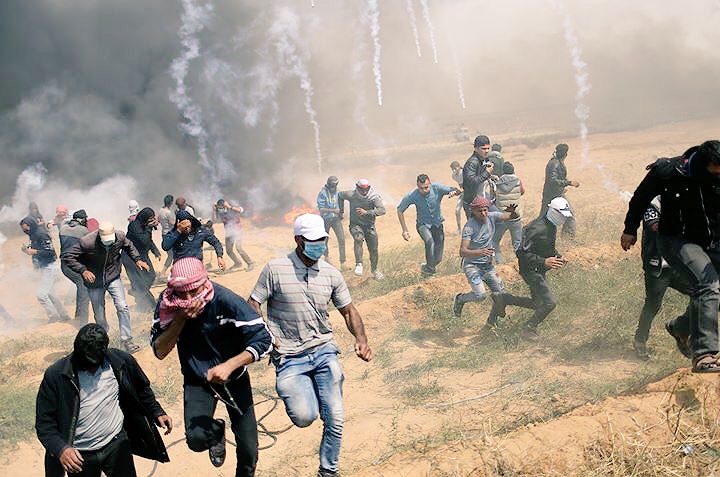 After Israel’s military aggression on the Gaza Strip last week, that caused dozens of civilian casualties, Israeli Occupation Forces (IOF) continued their violations of human rights and international law in the occupied Palestinian territory (oPt) this week as PCHR documented 157 violations by IOF and Israeli settlers.

In terms of Israeli violations of the right to life and bodily integrity, IOF continued their habitual excessive use of force, as Israeli police killed a Palestinian civilian in occupied East Jerusalem after chasing his vehicle, stopping him and having him step out of it, which proves he posed no danger to police officers. IOF also shot and injured 10 Palestinian civilians in separate incidents in the West Bank.

Meanwhile in the Gaza Strip, IOF shot and injured 3 Palestinians while protesting east of Khan Younis. It should be noted that the Supreme National Authority of Great March of Return and Breaking the Siege decided to cancel all scheduled activities for Friday 15 November 2019 due to last week’s Israeli military aggression on Gaza. Also during the aggression, IOF carried out 5 airstrikes on the Gaza Strip, 4 near houses and agricultural lands causing damage; fortunately, no injuries were reported.

1. Violation of the Right to Life and to Bodily Integrity

1. Excessive Use of Force Against Protests in the Gaza Strip

2. Excessive Use of Force against Protests in the West Bank

3. Shooting and Other Violations of the Right to Life and Bodily Integrity

Following this crime, the Israeli police spokesperson claimed that: “During the chase, police officers opened fire towards the car, wounding the driver critically, and was declared dead after attempts to revive him in the hospital failed.” Police retracted their statement later, announcing that preliminary investigations indicated that the victim did not pose danger to police officers and he was killed after he stepped out of the vehicle, unlike their claims earlier in the morning. Investigations showed that the police officer targeted Abu Nab after both emerged out of their respective vehicles.

Abu Nab’s father stated that he went to Salah Eden police station, and then to al-Mascubiyah police detention centre, asking about his son, but inspectors refused to confirm his death/injury/medical condition orwhether or not he was arrested. Later, an Arabic-speaking police inspector said that the police officers suspected and opened fire at his son’s vehicle. Abu Nab’s father added that while being present in Rooms (4), he received a phone call from the investigation unite and the “Mahash” police informing him that his son was killed and asked him to attend and file a complaint, in addition to approve on referring his son’s body to the Forensic Medicine to investigate the incident circumstances, however, Abu Nab’s father refused. In the vehicle parking of Rooms (4), Abu Nab’s father was surprised that his son’s vehicle, which was being held by the Israeli police, did not have any bullet marks and the glass was not smashed, which contradicted the Israeli claims. The police could have used less force against him and arrested him, since he did not pose any threat on the lives of the police officers.

1. Settlement Expansion and Settler Violence in the West Bank

1. Demolition and Confiscation of Civilian Property for Settlement Expansion Activities