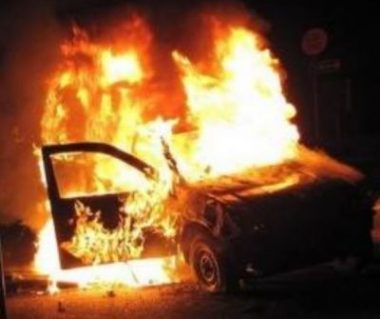 According to the Palestinian News and Info Agency (WAFA), 50 Palestinian vehicles were vandalized in the latest series of Israeli settler attacks in the West Bank district of Salfit.

Mayor of Kufur Ad-Dik, Ibrahim Issa Ad-Dik stated that a group of Israeli settlers sneaked their way into the Palestinian village, slashed the tires of 50 vehicles, and scrawled anti-Palestinian hate graffiti on several vehicles and the walls of houses.

Graffiti reading “A closed military zone” was scrawled across the wall of a villager’s house, in Hebrew, according to Ad-Dik, who noted that this was the second time the village was targeted by settlers in a year.

Daghlas, who monitors Israeli colonial settlement construction in the northern West Bank, said that a group of settlers sneaked their way into Majdal Bani Fadel and Qabalan villages, where they torched several vehicles and scrawled anti-Palestinian hate graffiti.

Settlers also overnight sneaked their way to Beit Dajan village, east of Nablus city, where they vandalized the home of Thaer Hanaysha, and set his vehicle on fire.

Many Palestinian activists and rights groups have repeatedly blamed Israel for fostering a “culture of impunity” for Jewish settlers committing violent acts against Palestinians.

“Price tag” refers to an underground anti-Palestinian Israeli group that routinely attacks Palestinians in the occupied territories, as well as inside Israel.

The Israeli government still refuses to label it as a terrorist organization and considers it only as group of vandals. It also considers such acts as hate crimes against Palestinians.

Over 600,000 Israelis live in Jewish-only settlements across the occupied West Bank, in violation of international law.