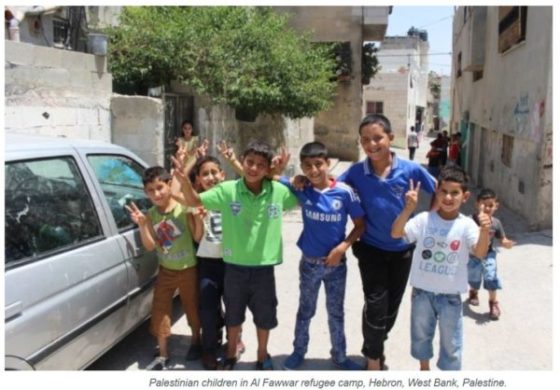 I recently had the opportunity to go and visit the Al Fawwar refugee camp on the outskirts of Hebron, West Bank, Palestine with the cultural and educational project, Go Palestine which is based in Hebron.

This centre provides opportunities for international students and others to come and experience life in the Occupied Territories of the West Bank, whether it be to volunteer, teach English, human rights programs or law and media internships.

I am from the North of Ireland and am currently studying for a Masters degree in International Journalism: Hostile Environment Reporting and have come to the West Bank for one month on the Media Internship as I am very interested in the political situation here and I believe that there are a lot of similarities between the conflict between Palestine and Israel and the conflict that has been ongoing in Ireland for centuries between the Irish and the British.

After some of the kids in the camp got an English lesson from one of the English teachers from the centre, we went on a tour around the camp to find out for ourselves what daily living conditions are like.

There are around eleven thousand people living in the camp, almost half of whom are under the age of eighteen.  The only work for the men of the camp is either to work for the Palestinian Authority or for the Israelis.  There is no land to work because of the Occupation.  Generations of these families have had to live here since they were forced off their own land by the Israelis in 1948.

I talked to one resident, Aida Hmouz, who has nine children.  Aida was born in the camp and her parents had to flee their homes when the Israelis confiscated their land after the war in 1948.  Aida said that living conditions were very difficult in the camp as she only has a small house for such a large family.

“I have to get up with the children at 7 am to try and feed the kids before they go to school.” she says.  “Sometimes there is problems with water and electricity because of the Occupation.  Then I have to feed the kids when they get home from school, as well as help them with any social problems they might have.  My husband has to work away from home for a week at a time in Israel, so I have to play the father’s role as well as the mother’s role.  The children have nowhere to play here and I am always afraid of them playing in the street or afraid in case the soldiers come to the camp”.

After I talked with Aida, we went for a walk around the camp to see what conditions were like.  There was rubbish everywhere and it was clear to see that living conditions were not very good.  This didn’t reflect however on the smiley faces of the children playing in the narrow streets, who were always very friendly and excited to have their picture taken and to talk to us.

We then went to visit Zyad Hamous who is the Services Office Officer for the United Nations Relief and Works Agency (UNRWA) which is a relief and human development agency for Palestinian refugees funded almost entirely by volunteer contributions from UN Member States.  Zyad says:

“Sometimes the Israeli forces will come and close the gates to the camp.  It could be for a day or two, a week or a month, meaning that no-one can get into or out of the camp, men can’t go to work to provide food for their families and the people cannot get any fresh provisions”.

There is one clinic in the camp which was built by the UN with financial aid from Saudi Arabia.  The clinic has two doctors, one of which is a dentist.  There are four schools that were established by the UN.

There is also a woman’s centre in the camp which was set up in 1993 and is managed by Rahma Hmouz.  The centre provides a place for women to come and talk because in the past it was customary for women to stay in the house.  It gives women confidence and also provides them with facilities to cook, a place for their children to play and provides them with money in times of hardship.  It also runs summer camps for the kids because they have nowhere else to play.

Ayat Alturshan runs a project at the women’s centre called ‘healthy food for healthy minds’.  She teaches the women how to bake cakes and teaches them English because they want to help their children with their schoolwork and when their teenagers speak in English, they want to understand what they are saying.  Ayat says that she helps women do what they love to do without the help of any organisations.  Ayat feels that NGO’s only provide temporary help for the camp whereas she ‘does not give them fish, she teaches them how to catch fish’.